I regret being unable to maintain a reasonable flow of blog posts over the past couple of months. In a number of ways, both professional and personal, this has been a tough opening five months of my fourth big year of solo birding. And in the heat of the battle, particularly from the time I began my eventful road-trip in northern California in mid-March, I’ve found it all too convenient to fill marginal hours with additional birding, and photo-editing (which generally takes one to two hours per night), rather than the equally important tasks of planning and documentation. Of course, once I started putting off the blogging, hopes of catching up became an ever-more-daunting challenge. The solution going forward, which I’ve herein implemented for a series of catch-up entries in conjunction with this explanatory one, is to condense and abbreviate my posts into a simpler format – comprised in main part of captioned photographs, with less text.

Although I thought I’d been keeping ‘The List So Far’ list of species more or less up to date in order to satisfy my hardest-core followers, after taking the opportunity to compose and print a ‘still needed’ list during a recent unscheduled short return home, some errors glared from the pages – mostly relating to the fact that I hadn’t recorded a number of common species that I thought I had, such as Barn Swallows and Tree Swallows – birds that I see very regularly. Independent of this, birders on a popular online discussion group recently picked up several photographic errors on my online year-list, including an out-and-out misidentification on my part (Franklin’s Gull. I greatly appreciate the heads’ up on these, and any future errors that I may make.

A final apology – I’m heading off to Attu today, and will be excommunicato for three weeks; so don’t ‘watch this space’ for a while!

One of the ‘must-do’ (and most enjoyable) single species chases associated with an ABA big year of birding is the ‘Colima Warbler mountain climb’. Colima Warblers are principally a Mexican species that migrates northwards each Spring to breed in the oak forests of the Chisos Mountains of western Texas – especially within the Big Bend National Park – and adjacent Mexico. This year, in addition to the 300 pairs of Colima Warblers that crossed the Rio Grande, at least one Slate-throated Redstart made the trip, having been reported quite regularly during recent weeks along the Boot Canyon Trail – very close to where I’d seen my first Colima Warblers three years ago. As before, I tackled the 3-4 hour hike during the cool of the early evening and night, camping in the vicinity of Boot Springs with the aid a Walmart-sourced overnight ‘kit’ comprised of the cheapest available sleeping bag, air-mattress, and tarp. I did this same thing for other big-hike destinations last time around, where-after I was able to find a homeless person to donate the gear to prior to catching my next flight.

The hike up Pinnacles Trail from Chisos Basin into the high elevation oak forests and Boot Springs is a popular one due to the beauty of the place – I love that I ‘have to’ visit such places – as per Ruby Mountains of Nevada for Himalayan Snowcock and Mohihi-Waiale Trail of Hawaii for the Kauai forest birds.

Through luck rather than good planning, I picked the right night for my ‘Colima hike’. As I left the Chisos Basin carpark and facilities an hour before sunset, conditions had already cooled to below 90 degrees, and would of course continue to cool during the gradual rise in elevation as I worked my way up the superb trails. Still conditions, and the rare absence of people contributed to magical feel to the place and amplified birdsong – which after dark was dominated by Mexican Whip-poor-wills. The moon-lit conditions were amazing, and I appreciated them, once I turned on my Walmart flashlight and came to realise it was a specialty ultraviolet model. It emitted very little light, and for some reason caused discomfort to my eyes, so I only used it through stretches of oak forest that completely shaded the trail. When it was on – it revealed a surprising number of ghostly glowing scorpions – and various small man-made bits and pieces such as a length of cotton thread.

Throughout my two-day ‘Colima’ experience in that magical place – during the moon-lit walk up into the canyon, while watching the night sky from air-mattress comfort, and during my unforgettable next-day of bird-searching, my thoughts were often with my Australian family – and especially Robyn’s sister Barbara, whose selfless generosity, positivity and quiet wisdom – even at the most awful and challenging of times is inspirational. These are some of the qualities that account for her role-model status within our family, to a wider circle of lucky friends, and to the countless special needs high school students that she has worked with during her lengthy teaching career.

Of course, I also thought of my dog Duffy, who clearly holds a grudge over my fourth year of practical absence since his adoption ten years ago, initially pretending to not remember me upon my brief return last week, only to start whinging and moaning when I began repacking my bags for the return trip to LA. It’s been tough on everyone, especially Robyn this time around, and if I ever do anything like a ‘big year’ again, it will be on a far smaller and gentler scale. 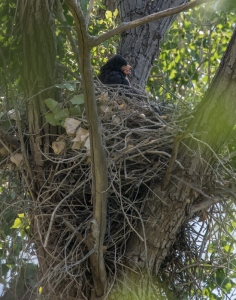 Shortly after reaching Big Bend from Midland – the nearest town with an airport, four hours north, I managed to find ‘the’ Common Black Hawk nest situated down at the Rio Grande portion of the park (having dipped a few days earlier at Oak Canyon, Arizona, where they are a pretty sure bet, and some weeks earlier at the Tubac Arizona hawk-watch during the annual northwards migration event. 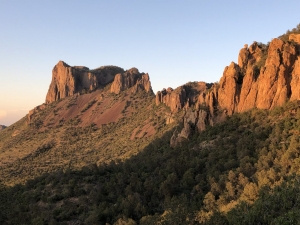 Late afternoon on my hike up to Colima Warbler haven, where I camped overnight in preparation for a big day of big bend birding.

From pre-dawn on ‘Colima’ day, the Colima Warblers were singing, and I took notice of at least eight along the trail over the course of the morning and up until early afternoon, while being cautious about the surprisingly similar (at least initially) local dialect of the plentiful Bewick’s Wrens. The resident Slate-throated Redstart however, proved to be a bit more challenging. At a critical stage I made the commitment to stay and keep looking/listening for it, rather than giving up and returning to the car in time to make my flight to Miami for the Zenaida Dove that had recently been reported on a daily basis. The plan had been to score both the warbler and redstart early enough in the morning to get to the carpark below by 10am, and hightailing the four-hour drive to Midland for my flight. As it happened, I didn’t find the redstart until almost noon. That was Saturday. With my scheduled Hatteras pelagic trip on Monday, Miami couldn’t work. After Hatteras, the full day of flights from Norfolk to Anchorage on Tuesday (i.e. today– I’m doing all of this catch up stuff on the long flight), before the ongoing flight to Adak tomorrow followed by the 2-3 day boat trip to legendary Attu Island. Once we set off in the mighty Puk-Uk, I’ll be incommunicado for three weeks.

I eventually found the Slate-throated Redstart, which appeared to have a girlfriend, though I didn’t get a close enough look at it to determine if it was a Slate-throated, American, or Painted Redstart. 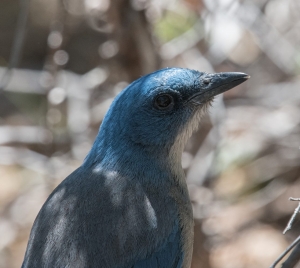 Slate-throated Redstart. Whew. If I’m not mistaken, he has a girlfriend as well – though I couldn’t get a good look nor photograph to see if she is a Slatey, American, or Painted Redstart.

As much as I tried to will it into reality, I couldn’t turn this Broad-billed Hummingbird into a White-eared Hummer. Was hoping for a Lucifer Hummingbird on this trip, but no such luck.

Pinnacles Trail at mid-day on my way down.

Ran into a couple of other birders making their way up the hill in the heat of the day, while I was heading down. One took this wanka shot for me, but then combined two of my least favourite Americanisms on saying goodbye: “Stay safe Sir!”. Staying safe is the opposite of what anyone should be aiming at in life, and ‘Sir’ is not an expression used in Australia, and best reserved for my Dad. Mercifully I was spared the currently trending salutation:  “Have a blessed day!”.

What happens when an iPhone finally blows off a car top at 50mph.

On to Hatteras, and the Gulf Stream

Well, you can’t plan pelagic trips weeks in advance and expect to nail down good (i.e. bad) weather conditions. ‘My’ day, the second of Brian Patteson’s ‘Spring Blitz’ of Gulf Stream birding, was calm, sunny, and boringly pleasant. That greatly reduced the chance for ‘megas’ such as Fea’s Petrel and Trindade Petrel – and indeed, we had neither. We did get most of the usual suite of hoped for ‘common’ birds however, and the calm conditions made it relatively easy to get some reasonable photographs. 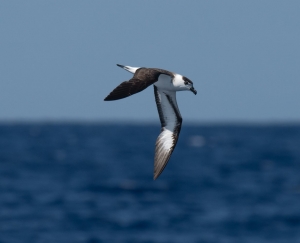 9 April Home on the Plains