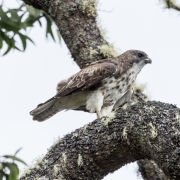 NOTE: The following blog post is retrieved from my 2016 ‘Birding for Devils’ blog – and will be deleted from this blog once I’ve managed to get the first few current (2019) blog postings up and running. or a more recent, and gentler perspective look at my 2016 ABA Big Year, here is my article in the August 2018 Birding Magazine  with permission of ABA Chief Editor of Publications and all-round birding guru Ted Floyd. If you are not yet a member of the American Birding Association, do something nice for yourself, for the hobby, and for the birds – and join now – its only $2.50 a month for digital membership.

For myself – and for Robyn, who’s had to keep things together in Australia (in-between her six trips to the US to join me for up to two-weeks at a time), it’s been a mighty big year – far bigger, and far more testing than I’d imagined possible during my naïve planning processes and recon trips throughout 2015. In fact, I have a lot of trouble accepting that it has only been one year – just 366 days, since I flew out of Sydney airport on the big red kangaroo. Surely there’s a ‘1’, or maybe even a ‘2’ in front of that ‘366’?

It wasn’t the sort of stretched out year arising from extended boring or unpleasant circumstances – as I’d imagine prison life might be like, but more a reflection of just how much activity was packed into a single calendar year – whipped up by the stressful nature of a competitive big year race – always at a frantic pace, and seemingly with the eminent threat of failure hanging from above like the fabled sword of Damocles. The year was a roller-coaster ride of ups and downs, with corresponding mood-swings and dramas – all crammed into a sleep-deprived blur. Next stop, Betty Ford clinic. Ever seen an Indiana Jones film?

My year started with an off-putting bang in Yuma Arizona, louder than the cheap fireworks show that kept me awake in my two-star digs on New Year’s eve. Streak-backed Oriole and Rufous-backed Robin. As the days and weeks unfolded, and tens of thousands of miles were traversed, it seemed more like the ‘big’ bang of quantum fame – destined to never really come to an end. Although the guts of my year on the road fitted between the cogs of the perpetual cycle of activity: airport, flight, rental car, motel, airport, flight, rental car motel, ad infinitum, there were sufficient gaps in that background rhythm to allow some of the most exhilarating experiences imaginable. 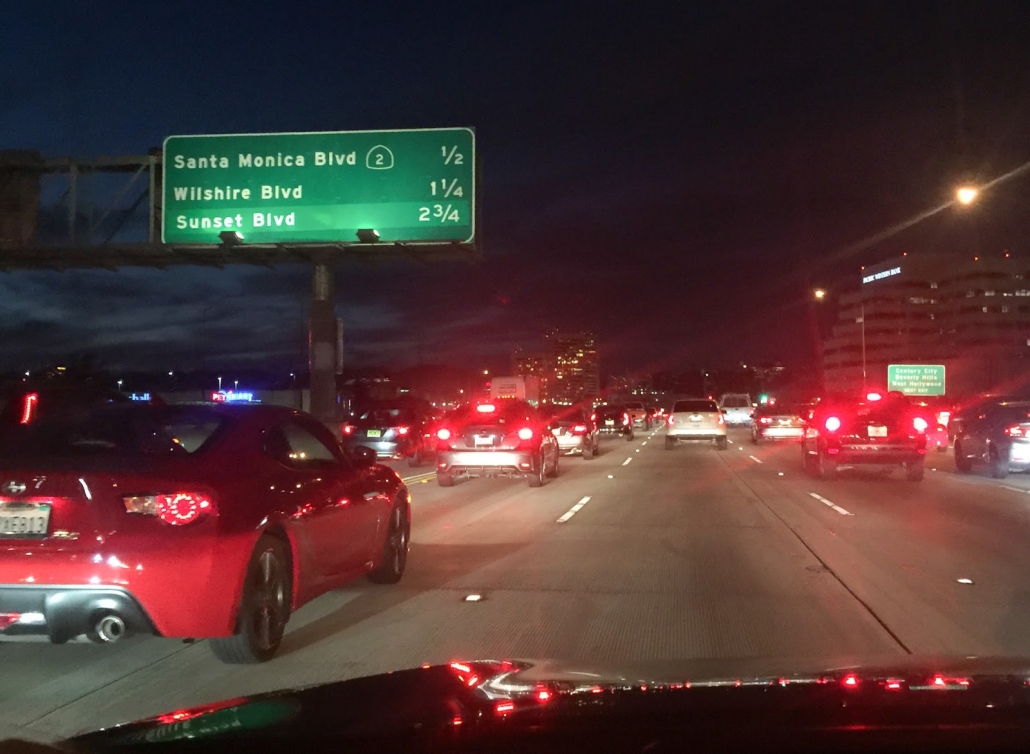 Big Year birding often feels like ‘Big Year traveling’. I can’t think of a major city that I didn’t at least ‘freeway’ my way through. I can recall at least eight occasions that I drove/crept through Los Angeles traffic through the year.

To the other three 2016 big year birders, I extend sincere congratulations. In terms of ‘going hard’, I take my hat off to them all. I know that I was driven to far greater efforts knowing that the other guys were as focused and dedicated as they were. To the ABA team who maintain the prominence and relevance of the Big Year ethos, thank you! The organisation is an active and effective one, and has a lot to be proud of. 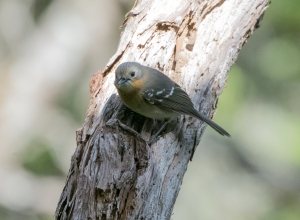 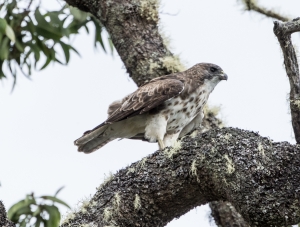 In addition to Hawaii, I devoted a fair bit of effort late in the year in Washington State and New England, whittling down the number of ‘Canada only’ species on my list, eventually contracting it to just four: Redwing, Fieldfare, Yellow-legged Gull and Common Shelduck.

My end of year trip to Adak with Robyn provided a lucky, and very happy ending – finding a trio of Whooper Swans during the last hour of sunlight on the last day of the year. We enjoyed surprisingly good weather despite severe wind warnings. Within Adak’s breathtaking landscapes and fascinating social heritage, we encountered many other exciting birds – highest on the list being a fluttering kestrel, which we unfortunately were not lucky enough to photograph or otherwise determine species. It was most likely a code 5 Eurasian Kestrel… 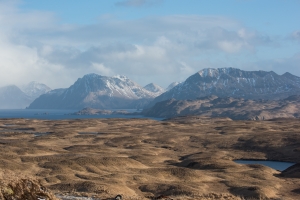 Adak Island, looking down from ‘Valley of the Lakes’. 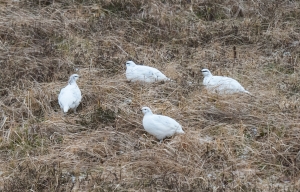 Adak Rock Ptarmigan fashionably gearing up a bit early for the snow season. 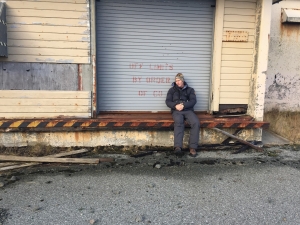 As the clock ticked down for 2016, it looked like I’d sacrificed the opportunity for one last mega (Bananaquit in Florida, reported mid-morning, 31 December) in order to miss another (Whooper Swan) on ex-military ghost town Adak Island, Alaska, and what at that time was shaping up to be an unfortunate ending to a year with many ups and downs. 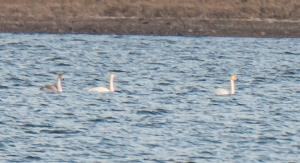 From rags to riches – and the biggest moment of my ABA birding odyssey: a trio of Whooper Swans encountered on Lake Andrew, Adak Island.

The Whooper Swans represented my 111th coded bird species for the year (including three ‘provisional species’ still awaiting ABA acceptance) – a crazy 25 species ahead of Sandy Komito’s 1998 rarities count that was once reputed to be unsurpassable. My total species count within the ‘Classic’ ABA area included all 672 Codes 1 and 2 species, and tallied 783. With an additional 52 species encountered in Hawaii, my ‘New ABA’ final tally was 835.

Revisiting the question I often asked myself during 2016 – of what I could possibly have been thinking about when I made the decision to throw my hat into the ABA Big Year ring, I can now accept that in spite of the at times intense pressure, which of course in the end I have to take responsibility for, I found time to explore many beautiful places in search of spectacular North American birds (though nowhere near enough time was available).  To answer another frequently asked question: at year’s end, my choice of a ‘favorite’ bird species encountered during the year finished up as a split-decision between the elegant and redeeming Whooper Swans of Adak, and that wascally little Winter Wren that I fondly watched from the boardwalks of The Biggest Week of American Birding in Ohio. 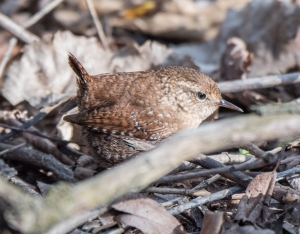 Cute as a button: the minuscule yet mischievous Winter Wren.

During my travels I celebrated many of the wild and varied places that I’d read about in Roger Tory Peterson’s inspirational Wild America during my preparations, and in all of the books and blogs subsequently produced by ABA Big Year birders. I was similarly invigorated through rediscovering a few still-wild places that I’d wandered as a kid with an eye only for snakes. I found the Americans and the Canadians – from the earnest Yupik clansmen within a stone’s skip of Russia, to warm French Canadians in the frozen Quebec backwoods – right through to those vociferous yet generous to a fault Joisey birders, along with the joyful Hispanic people of the Texas Rio Grande Valley, all delightful beyond expectations. I made many wonderful friendships that I intend to keep – a measure, I believe, of a reconnection that I did indeed make with my so rudely-abandoned homeland. 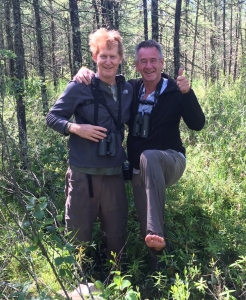 Babes in the woods: British birder, natural history film maker, funnyman and life-long friend Nigel Marven and I celebrate our shared lifer Connecticut Warbler at Sax-Zim Bog, Minnesota. We first birded and snaked together in 1986!

My cherished cohorts for so many birding missions. Without Christian’s and Laura’s help and friendship, 2016 would have ended quite differently for me. Here we are at Greg and Erin Neise’s house in Chicago on 4th of January to celebrate the end of a mighty big year. Christian doesn’t have a conjoined twin growing out of his neck. ‘Hi Robyn!’

So far as providing the traditional set of year-in-review stats of Big Year efforts: numbers of cancelled flights, miles driven, wheels flattened, Big Macs consumed, and so on, I’ll eventually make proper calculations of the most relevant of these and recount them. What I can say now is that yes, as speculated, the costs were way more than I’d expected or could actually afford (or will likely ever fully admit to myself – let alone you lot); and sure, I travelled way beyond ‘environmentally responsible’ distances by air, road and sea.

Although my intention was to promote Devil Ark extensively throughout my American Big Year, the realities of a high-pressure race to encounter the most bird species possible in a too-contracted time frame, were such that almost all of the fundraising work that did take place was accomplished through Devil Ark’s partner organisations – Australia-based Foundation for Australia’s Most Endangered Species (FAME), and US-based Global Wildlife Conservation (GWC). Between the efforts of these two organisations, coordinated by my co-managers back home, a reasonable sum of $138,000 was raised in association with my competitive bird race. This amount is equivalent to nearly half the annual operational budget of Devil Ark, and is greatly appreciated by the entire Devil Ark team, and about 200 lucky little devils.

Devil Ark is a ground-breaking conservation captive-breeding initiative for Tasmanian devils located in the high elevation Barrington Tops of New South Wales. Genetically select social groups of 6-8 devils inhabit each of the many 10-20 acre enclosures predominated by beautiful Tasmania-like forests, safe from the devastating Devil Facial Tumour Disease (DFTD) that continues to burn through the wild population. 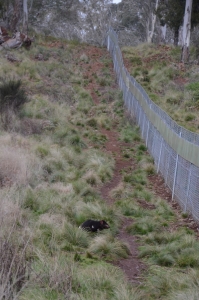 A lucky devil at Devil Ark, and vital component of overarching efforts to ensure the survival of the Tasmanian devil. The Birding for Devils platform assisted in generating awareness and funding for the project. 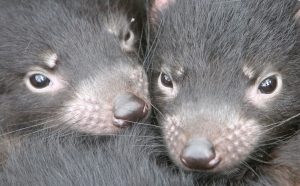 Extinction is not an option.

Considering the extensive carbon footprint created by my perpetual travels during 2016, I asked GWC to calculate and recommend an appropriate carbon offset measure. To this end I donated the funds required to purchase a 30-acre parcel of Ecuadorian rainforest as a handy annexure to the Buenaventura Reserve. The Reserve provides hope for the endangered El Oro Parakeet and a range of other tropical bird species, and provides an important wintering ground for warblers and other migratory species that I ‘ticked’ during the northern Spring and Summer months last year – thousands of miles to the north.

My Big Year ‘carbon offset’ donation translated into a 30acre addition to the scenic Buenaventura Reserve in Ecuador. The remnant cloud forest reserve provides hope for a range of threatened species, and a winter oasis for many North American migratory bird species. 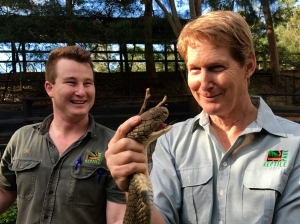 Back at work where I belong. For a year anyway. Maybe. With Keeper Zac and Regina, Queen Cobra.

Again? Are you kidding?
Scroll to top