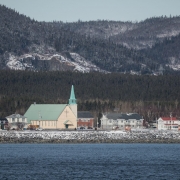 This is an update without anything solid to update with. No new birds, and we are getting our arses kicked. But since most people assume we are taking turns paddling a kayak across Alamo Lake in Arizona for an interloping Blue-footed Booby – and I truly wish we were – Robyn and I are in fact freezing and increasingly frustrated at the Gulf of Saint Lawrence in the heart of French Canada, dipping on my target birds in painfully slow motion. The plan was to find Dovekies on the Matane – Godbout Ferry, and Purple Sandpipers at one of several red-hot locations on the southern shoreline. This should have happened on Sunday and Monday. Monday was the big ferry ride – two hours out, and two hours back; departing Matane at 7:30am, and returning to dock at 1:30pm. But conditions on the prow of the ferry were brutal, and though I had several ‘almost sure sightings’ of Dovekies, on each occasion, upon returning to the protected cabin and inspecting my photos, they morphed into bigger birds of different species  (Black Guillemots, Razorbills, Commonb Murres). The combination of fogged goggles, considerable distance, big waves and big hopes conspired to apparent  ‘shrinkage’. As per the previous afternoon, we then searched unsucessfully for Purple Sandpipers – in one site where a flock had been spotted that very morning. Again, a false-hope internal high-five when I saw a Black-bellied Plover at a distance and gave a big thumbs up to Robyn some distance away. At least I added White-winged Scoter to my year photo list. Sheesh.

The most challenging part of playing it smart in this game is to know when to give up. With the competing factors of intermittent forecasts of good  weather – the next being a particularly good day on Thursday, competing opportunities including the Booby, and the offer help from Quebec birder Vernon Buckle towards what looks to be a sure bet for Dovekies (but involves wildly expensive five stopover flights), and the difficulty I have in ‘killing’ one day, let alone two, as had me second-guessing on an hourly basis, after deciding to hang around for a second ferry run on Thursday. Today’s ferry was cancelled due to blizzard conditions, and tomorrow’s is also in jeopardy due to very big wind warnings. We combatted insane conditions today to try to ambush hunkered-down Purple Sandpipers, but this proved a really dumb idea. So one day killed towards a potential big day on Thursday, but I’m on the brink of cashing in my chips and shooting off to Arizona. I hate killing time, especially when I can access rare bird reports from elsewhere on an hourly basis. Anyway, that’s where I’m at – I’ll update next when I actually have something to report. Hope its before I leave Canada, but I give that a 50/50 chance only. 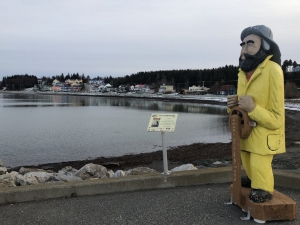 This part of Canada is a scenic region that like much of the country attracts considerable tourism – at any time other than Winter. 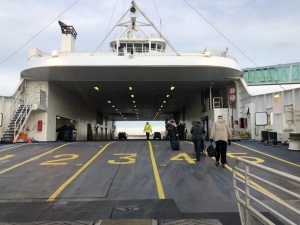 High hopes upon boarding the Matane – Godbout ferry across the Gulf of Saint Lawrence. 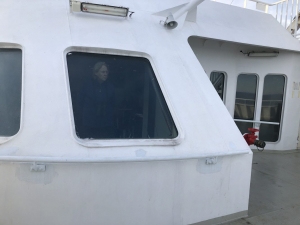 Robyn avoids the freezing headwind on the prow. Smart. 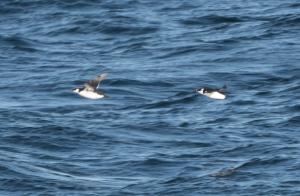 Several species of black and white Alcids got my heart racing, but none proved to be the real deal.  Damed digital cameras. These two were Razorbills – a much larger species, though I nearly willed them into being Dovekie size at first sight. 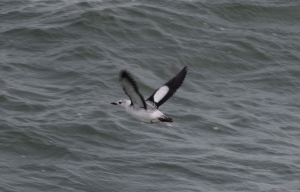 Black Guillemot. Presumably so-named before taxonomists got ahold of winter plumaged specimens. These, along with a number of Common Murres seen at great distances looked small enough to be Dovekies, but never were. 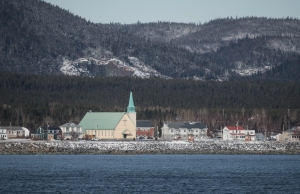 Godbout – pronounced ‘good boot’, on the opposite shoreline of the Gulf of St Lawrence as Matane – pronounced Mah-tahhn. 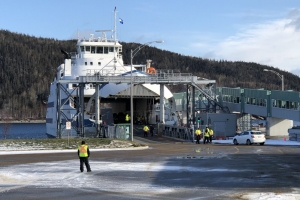 Reboarding the ferry for another two-hour dip-fest. 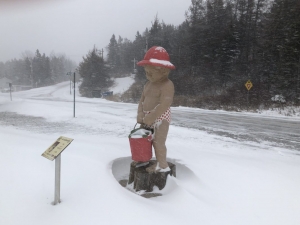 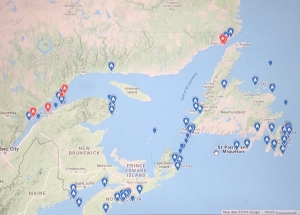 November and December records for Dovekies the two blue flags and red flag clustering about a quarter of the way from left edge of image are from the Matane ferry; the Red flag and associated blue flags in the upper right corner are at my ‘sure bet’ location at Blanc-Salon. Just try and figure a way to get there with fewer than five flights from anywhere, USA. Really.

A big day and night at Aussie Ark