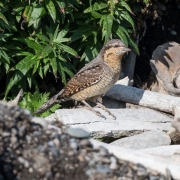 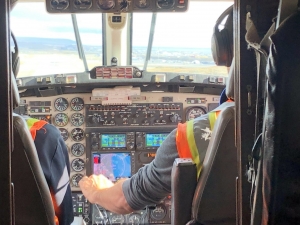 RAVN bush pilots earn their stripes getting into many remote Alaskan communities in all sorts of conditions. Except for fog, side-winds, and smoky conditions. One of which seems to happen every few days. 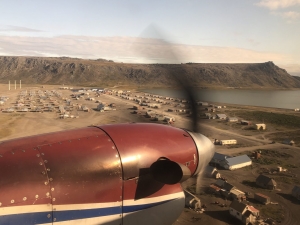 This must be my fifth or sixth flight into Gambell, on St Lawrence Island, 38 miles from Russia. Very rarely is it as clear and calm as during my arrival early Monday evening, after which time it was a frickin’ tick fest. I love/hate Gambell. The love part is a new addition.

I arrived in Gambell on Monday evening at 6:30 – four hours late – before all hell broke loose. Well, the flight was delayed four hours – but admittedly, that was on top of an additional 24 hours of delay that had been self-inflicted. I’d been lounging around in a comfortable Anchorage hotel room for two days after my eventful multi-day pelagic trip out of San Diego, catching up on planning, and sleep. Because I could see on the weather sites that the winds reaching Gambell were all coming from the wrong directions to entice migrating Asian birds, and since the bird rarity reports coming from the island were just about non-existent, I was comfortably stretching out the time before my inevitable return to America’s closest landmass to Russia (36 miles – you can see it on a clear day). But the weather forecasting gurus proved to be off –  and mild westerly winds hit coastal Russia on Saturday, with instant results for birders who did have the fortitude to be hunkered down on the island. Sunday morning saw the arrival of two Siberian Accentors, and the afternoon yielded a super-rare Middendorff’s Warbler. I booked the next available sequence of flights to get me to Gambell, with departure from Nome at 1:30 Monday afternoon, for a intended arrival at 3PM. Instead, the six passengers – which included well known Alaskan birder Greg Scyphers sat around at Nome RAVN Air for four hours waiting for the pilot to give the thumbs up.

At 6PM – late, but still with four hours of daylight remaining, we touched down, and were greated by birders Chris Feeney and Larry Peavler, who took my breath away with – “Hurry, grab your binoculars and leave your luggage behind – for the Wryneck.” Wryneck?! It took a while for the magic to wash over and reality to remain – there was a Eurasian Wryneck to be seen?! This is a fantasy bird, and the unfolding minutes were dreamlike. No more than 200m from where we stepped off the plane, a half-circle of birders were clearly pointing their cameras and binoculars at something good. Could this really be happening? Chris gave Greg a ride on his 4-wheeler, and Larry gave me a ride on his, and we were almost immediately watching the Wryneck hopping around chasing insects on a bare patch of recently dug up boneyard, surrounded by dense, knee-high wormwood. Through the binocs and the camera viewfinder, I watched what may well be the most extraordinary bird I’ve ever seen. It seemed to be more scaly than feathery – as much reptile as bird. Irrespective of the action packed three hours to follow, I’ve  spent most of my post-birding mental recapping, and photo-looking, thinking about that magnificent bird. The outgoing birding group, including my big year birding cohorts Richard and Gaylee Dean had fortunately been  able to see the bird just minutes before their outgoing flight (on Bering Air) – about a half-hour before my arrival (on rival RAVN Air).

I’m totally mesmerised by this bird. Kind of like when  I saw my first Boelen’s Python, or D’Albert’s Python. Or Mangshen Viper. Or, all those years ago, when first I arrived in Australia – Crimson Rosella. The Wryneck has it all: totally artist-designed markings – which the closer you look, the more lost you become; rarity, mystery, and mythology. Those damned Australian birders who stayed a day longer than I could stay on Cocos Islands during my 2014 Aussie big year saw one. You know who I’m talking about Glenn. I believe this is the second or third ABA record for the species.

The funny thing is, that after the Wryneck, when, five minutes later, I saw the stakeout Pallas’s Grasshopper Warbler, the fact that it was the very first ever record for the ABA area, I was still foaming at the mouth about the Wryneck. Ditto, when I then saw my lifer Little Bunting, followed by lifer Rufous-tailed Robin – with Aaron Lang’s colourful recounting of his first one in Thailand, when his Thai birding compadre tried to excitedly spit out “Woofus tailed Whobbin” a couple of hours later at the famous ‘Far Bone Yard’, where we also saw a Siberian Accentor well, but I could not score even my usual blurry-standard of flight shots as we flushed it time and time again. Other coded bird species I saw during the three hour mega-monday-night-tick-fest were White Wagtail and Red-throated Pipit.

BTW, if it isn’t clear enough yet, it’s my opinion that Eurasian Wryneck is the ‘best’ bird ever sighted in the ABA area. Or at least for birders with a background in reptile interest. Have a look at these pix and see what I’m talking about: 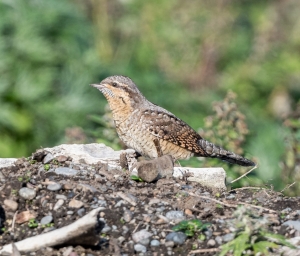 Is this the most spectacular Asian bird ever to land in the ABA region? Sorry about the bones, but it isn’t called the Near Boneyard for nothing.  Eurasian Wryneck was the last bird I ever expected to see during my ABA Big Year. I now almost feel exonerated for choosing to put my family, workmates and dog through this whole year-long absence thing. Look at the checkerboard patch on wings. 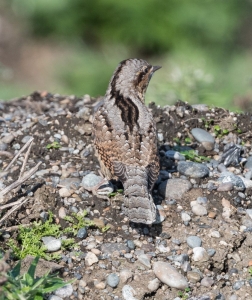 And the back is a whole other thing – or many ‘other things. Zoom in and get mesmerised. Seemingly discordant elements come together like a symphony orchestra. 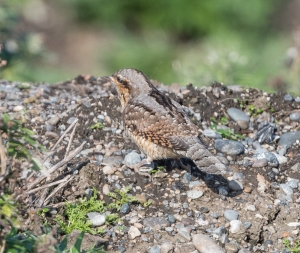 Don’t go! The Wryneck flew off a half hour after my arrival, during which it fed frantically despite elated shutter-festing by a dozen birders, perhaps never to be seen again. Fellow Big Year birders Gaylee and Richard Dean had seen the bird just prior to their flight out of Gambell, a half-hour before my arrival. Hopefully this sensational bird is now back on correct southward migratory path through  Russia heading for somewhere in southern Asia. 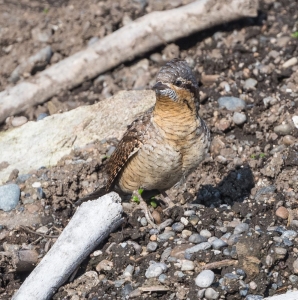 I love you. Especially your scaly helmet. And your ringed legs. And reptile scales. And your super-clever colour palette of rufous, buff, grey and black – and somehow really making it all work. 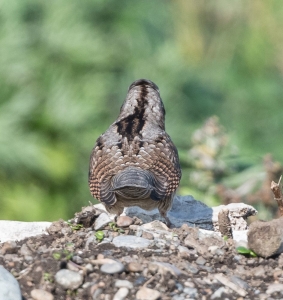 Just check out that arse: reptilian symmetry and attention to detail.

OK, back to the relatively mundane. Yeah, first for North America – Pallas’s Grasshopper Warbler. Yeah, kind of exciting. And two additional lifers in Little Bunting and Rufous-tailed Robin, and the nearly as rare, but more spectacularly coloured and patterned Siberian Accentor – possibly the best-sounding exotic birding name on the ABA books. Not sure why someone couldn’t come up with a better name for ‘Wryneck’.  So, after a flat day on the ground today, with most of the birds of the mega-Monday apparently heading west last night, I left Gambell – only 20 hours after my arrival, on the bet that current weather forecasts of doom and gloom for Gambell will eventuate. Strong easterlies are supposed to come in from tomorrow, making flights off the island problematic, while the same system is meant to be driving westerlies into the Pribilof Islands to the south. I’m going south. Flights from Anchorage to St Paul are twice weekly – Thursday and Sunday. Today is Tuesday, I’ll be on Thursday’s flight – if its not cancelled due to heavenly westerlies, right out of Russia. I’ll figure out the details later. 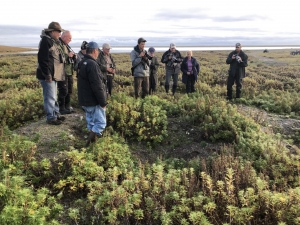 A cluster of well known Alaskan birders, including Aaron Lang – centre, closing in on a skulking rarity in the Far Boneyard. 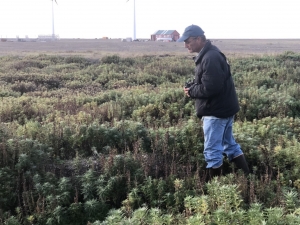 Paul Lehman, the undisputed King of Gambell birding and ornithology. His decades of extended presence on St Lawrence Island have contributed to a large proportion of the Code 5 super-rarities at the back of the ABA checklist. Paul’s massive dataset of all things ornithology on the island  has assisted in his production of the PhD equivalent tome:  THE BIRDS OF GAMBELL AND ST. LAWRENCE ISLAND, ALASKA. 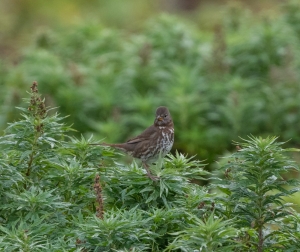 I didn’t come all the way out to the edge of the world to see an American Fox Sparrow, though it is a very nice sparrow… 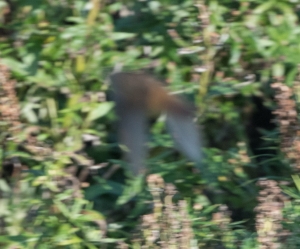 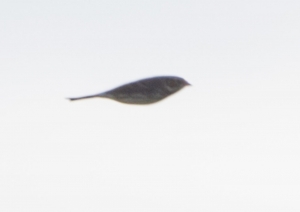 Again, you’ll have to trust me on this one – its a Little Bunting. Really. 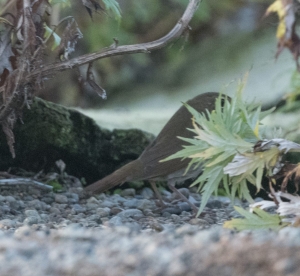 And this sneaky little skulker is a Rufous-tailed Robin. 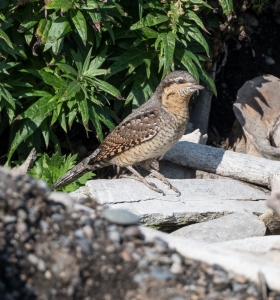