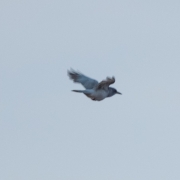 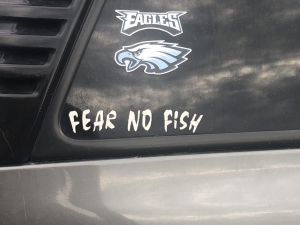 At the time I noticed this fishing-person’s self-enthused bumper sticker, I was beginning to wonder if I could still say the same thing about my feelings towards  birds, given the pounding I’d been copping from so-called ‘common’ (Code 1 ) Pinyon Jay – aka Devil Bird.

I know something about running scared. It’s a state of mind that can follow any decision to reach into the unknown, or move up a rung on an unfamiliar ladder,  especially when the effort is underpinned by ‘why not’ audacity rather than considered research. With escalating frustration arising from my stupid mistakes and unlucky trends in the pursuit of Operation Pinyon Jay, worry had undoubtedly begun morphing into fear in the midst of an unfolding worst-case scenario. One factor that a bit more research would have revealed, is the habit of scattered pairs and small groups of Pinyon Jays to congeal into fewer, at times very large flocks at this time of year – reducing the odds of finding them in a broad scale landscape.  Recent patterns of  flocks reported on eBird were mostly unhelpful,  seeming  to be largely random throughout the widespread the elevated conifer woodlands and forests of the central west.

I have may own thoughts about the ABA rarity coding grouping, admittedly shaped from a very particular perspective. As best I can tell, the code rankings – from the most common bird species (code 1) to rarest (code 5), are assigned in part on the basis of how many eBird reports of each species are made each year in the ABA area, perhaps also on more subjective criteria. But from the perspective of an ABA year-lister, I tend to rank the seasonally and annually resident bird species more in terms of how much effort must be extended to actually find one. Maybe there are enough Pinyon Jays ‘out there’ to satisfy the offical ABA Code 1 ranking – but here’s a challenge: let’s see youfind one!  By yesterday (Aug 18th) afternoon, my efforts to do so had descended to an increasingly frustrating challenge with little sign of coming to a close any time soon.

Recall that while Robyn was still on the Jay trail with me, we designated a day to drive a few hours north of LA on Monday, 4 August to a location (Cow Heaven), only to realise, too late, that access to the site included 20 miles of 4WD tracks – and we were driving a standard rental. We improvised, and tried to get into appropriate habitat anyway, and found, in the final hour of daylight a nice trio of ‘Pinyons’ – that on closer inspection were in fact standard-issue California Scrub-jays. 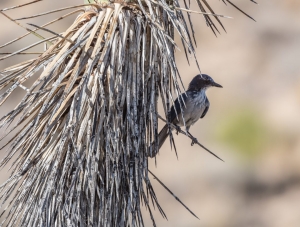 The next day (Tuesday) we targeted and found a somewhat posher rendition of the California Scrub-jay on Santa Cruz Island – Island Scrub-jay. 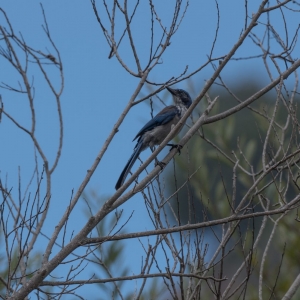 That night I put Robyn on a plane heading back to Australia, while I shot over Arizona to search just south of the Grand Canyon for Pinyon Jays. I visited two supposedly proven sites north of Payson unsuccessfully on Wednesday afternoon until sunset. In the fading light – BINGO – a likely suspect flew into view, clearly responding to playback I’d resorted to. But something was wrong – although the jay was playing hard-to-see high in a dense conifer, I caught a glimpse of a crest. So close in appearance to a Pinyon Jay, this was a Steller’s Jay. Buggah. 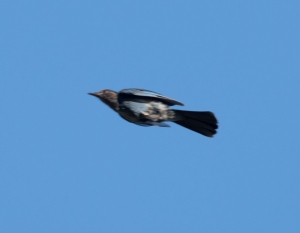 Close, but no cigar. Steller’s Jay.

An hour later, another ‘probable’ Pinyon Jay in another ‘proven’ location was looking good in the fading daylight until I could see  telltale crest of Steller’s Jay on my camera back,  indicating that I’d missed again.

Feeling deflated, I booked into a hotel in nearby Heber, and went online in search of better information about recent, or at least historic location information about Pinyon Jays. Although reports of a Code 3 Berylline Hummingbird six hours south in the Chiricahua Mountains had come through by the time, I was tired, ready to hit the hay, and firmly focussed on the business at hand – Pinyon &^%# Jay – come what may.  I’d do my best to finish my Operation Pinyon in the morning, then point the  rental southwards for the long drive south towards the Arizona border-town of Portal. One site struck me as offering the best bet – with regular sightings of good numbers. I should have taken better note of the fact that all of the reports were from the same individual… On approaching “concho” (as spelt and punctuated), west of Show Low, Arizona, I liked the habitat that was taking shape. A mile or so from “concho” a series of notices of private property, no trespassing, trespassers will be violated, and so on, indicated that I’d screwed up again. The site of regular mobs of highly vocal Pinyon Jays was clearly on private property, and I was not welcome. No big thing –  I figured the final ten miles or so that I’d passed through looked very promising. I drove slowly with windows open, and soon had a trio of raucous jays. It took a bit of stalking, but I eventually managed to photograph one of the birds, hardly taking time to give myself an internal high-five, before getting back on the road – bee-lining to to the Chiricahuas for the Berylline Hummingbird. 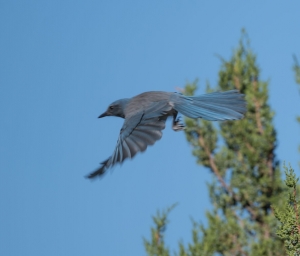 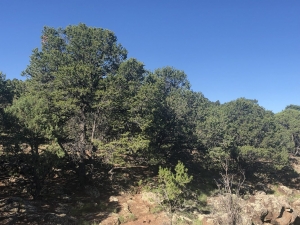 I mean, look at the habitat! Gotta be Pinyon Jays here, right??

As previously reported, I found the Berylline easily, then connected with a much-needed Elegant Trogon. What a day! Pinyon Jay, Berylline Hummer, and a Trogon. NOT. I’d been in such a state of urgency when stalking and photographing the Pinyon Jays, I never really too a good look at the birds, or my photographs. Yeah, I managed to screw up Operation Pinyon Jay yet again: the bird in my images was was yet another imposter – this time it was a Woodhouse’s Scrub-jay. I was devastated, but was already committed to a flight to San Diego.

Surrendering  from  the Pinyon challenge, at least long enough for a regroup, I drove from San Diego to the southern  shore of the Salton Sea, about 30 miles north of Cher’s home town, and part of the Sony Bono Wildlife Reserve. Risking my drivers licence all the way, I made it to the site of recent Yellow-footed Gull sightings. This species is only possible in the ABA area during summer months, and only along the putrid banks of the bacteria soup that is the Salton Sea. Why the small contingent of gulls travels north from the Baja Peninsula of Mexico each year has a partially African explanation. The lake is brimming with introduced African fish: Tilapia. There is   The sun had just set, but I could see a row of gulls and shorebirds at the edge of the lake/sea several hundred metres from where I left the car, and jogged into the hot (105F) wildly bad-smelling (think rotten fish soup) to get within camera and binocular view of the gulls. I sprayed camera exposures at one particular bird which was clearly not a Ringed Gull, and most probably a Yellow-footed Gull – not Western Gull. I later double checked with California birding pals Michael Woodruff and Matt Grube, who confirmed the ID. 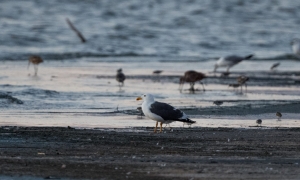 Yellow-footed Gull in the fading late afternoon light, with the hot and putrid Salton Sea in the background.

With the Yellow-footed Gull in the bag, I flew back to Arizona the next morning, and went for yet another, and even more determined mission to score a Pinyon Jay.

I arrived in the northeastern portion of the Coconino Forest north of Payson, late on Friday afternoon with renewed hope. I’d thoroughly investigated recent sightings of Pinyon  Jays at West Chevelon Canyon, and was certain this was my best next shot. 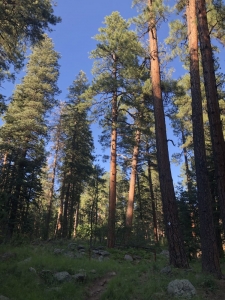 I stopped along the drive north through the Conconino Forest for flashes of blue – but on each occasion these were either Steller’s Jays or Western Bluebirds.

Finally, with two hours of sunlight left, I reached the four or five locations near West Chevelon Canyon where Pinyon Jays had been reported in recent weeks. I drove very slowly along the remote dirt roads with windows opening, looking listening for jays. I figured I was ‘in’ with a relatively cheeky jay – but wasn’t so easily fooled this time. Woodhouse’s Scrub-jay. Of course. 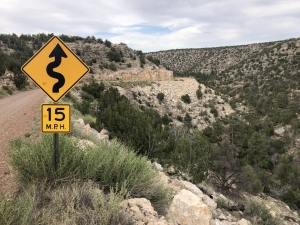 Yet another remote ‘likely haunt’ of Pinyon Jays, with yet another false win. 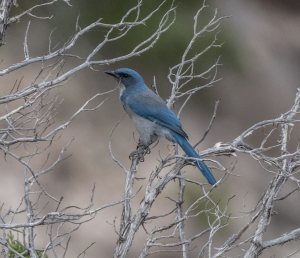 Woodhouse’s Scrub-jay, once again, this time in the upper Conconino Forest in the West Chevelon Canyon, where the species isn’t supposed to be. But it is.

Eventually, it had to happen. I heard the ‘akk-akk’ call of a Pinyon Jay, quite different, it turns out, from ‘yeaak-yeaak’ of Steller’s Jays and the ‘oink-oink’ of Woodhouse’s Scrub-jay. 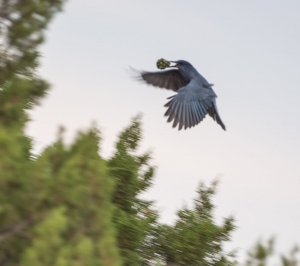 This single Pinyon Jay was quite vocal, before flying out of a pine tree with a tasty pine cone, into a juniper. 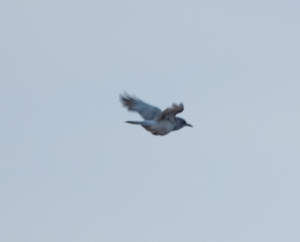 After chiselling away on the pine cone the Pinyon Jay 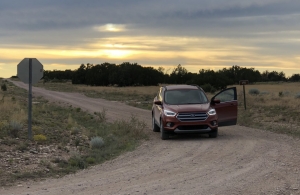 The remote intersection where I finally heard targeted Pinyon Jay, in the final hour of daylight.

Although my fear of dipping on the Devil Jay was suddenly replaced with euphoria, another scary proposition soon shifted into view. Now that I’d completed my hit-list of resident birds for the summer, I’d run out of excuses not to head north to the Alaskan Island outposts – . My 2016 Fall Alaskan experiences hadn’t been easy, and I’d sort of compartmentalised the need to spend so many weeks on the islands hoping for westerly winds to blow a few Asian migrants off course and into ABA territory. Gulp.

But first a much anticipated (American) family reunion in the Ozarks of Arkansas – and the anticipation of breaking up my Alaska-time this  time around, with Pacific coast pelagic birding trips, including an all-in gamble that a ‘repositioning’ cruise from Vancouver to Los Angeles would validate my decision to skip the ten Cal-coastal  one-day pelagic trips I undertook in 2016. Desperate time do call for desperate measures, and I admit that due to extrinsic circumstances, this year’s effort has shaped up to be a bit of a crap shoot. But I’m feeling lucky.

Southwest for a few days

Family time, then quick swoop in Anchorage before Gambell
Scroll to top