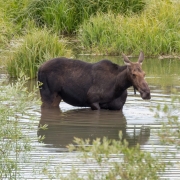 I.  With Robyn on board for just a short two-week stint, I didn’t want to push the pace too much. But she’s been a good sport, and push we have – making terrific headway in executing the necessary single-species birding missions that are a feature of an ABA Big Year effort. After California (Nazca Booby, Surfbird), Arizona (Spotted Owl, Rufous-capped Warbler), and Texas (Mexican Violetear, Buff-breasted Sandpiper) – as per previous blog entry, we combined the obligatory mid-western run for a Eurasian Tree Sparrow with a twitch for the way-vagrant – Little Stint discovered south of Peoria by locally active Illinois birders. We got lucky with the Stint – mainly because upon our late arrival to the Emiquon NWR wetlands, my buddy Ruben Stoll, along with several other birders I knew, including Glenn Giacinto and Colin Dobson, had been maintaining the distant bird in scope view, knowing we had suffered a flight cancellation, and were breaking land speed records getting to the gig. After saying goodbye to the guys, we headed off to nearby Goofy Ridge portion of Chautauqua NWR for a ‘sure thing’ Eurasian Tree Sparrow. While following the pathway to Goofy Ridge we were overtaken by Colin Dobson, then a stream of additional fast-walking, scope carrying birders, including ABA birding historian and Chicago birder Joe Lill. None of these guys had visible interest in finding the locally common Tree Sparrows, but were were high-tailing it further along the trail to a mudflat overlook where a second way-lost Asian vagrant currently mixing with thousands of seasonally present shorebirds – comprising more than twenty species, had just  had just been relocated by Scott Latimer. This one was a Ruff – a species I’d already managed to encounter some months earlier in California.  Still, I followed the excited throng to where Scott still had the bird in scope. 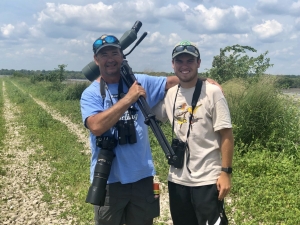 Illinois super-birders Scott Latimer and Colin Dobson making it much easier for out of State/Country hacks like me to ‘find’ the two ABA news-making rarities – Little Stint and Ruff at the migratory shorebird hotspots south of Peoria.

Despite seeing two Asian rarities in less than an hour, our business with the mundane feral Tree Sparrows required several additional hours, before closure, but not before the need to cancel our outbound flight to Boise, Idaho, to meet up with my sister Vicki and her husband Pat – enthusiastic birders, with whom were going to travel south together for a crack at the recently split (from Red Crossbill) Cassia Crossbill. Instead, we made arrangements to meet them the next day at the elevated campsites of Sawtooth National Forest. We arrived mid-afternoon, finding Vicki and Pat in need of a rest, after apparent non-stop birding since sunrise.

II.  Vicki and Pat have lived extraordinary lives – always associated with the outdoors, from early days in Colorado and Alaska, when Vicki pursued a research career in microbiology in association with native wildlife diseases, and Pat served as a smoke-jumper / fire boss, often in the most extraordinary circumstances. As Vicki continued her microbiology, Pat returned to University to pursue a second career – with the US Army Corp of Engineers as a hydro-engineer, whereafter he took on the role of managing dam levels and outflow rates, often in difficult consultation with affected stakeholders – from environmentalists to farming communites. These two have spent as much time in the wilds of North America as just about anyone alive today, and the birding facet of this experience is the present focus. Pat has been known in mountaineering circles for decades for his extraordinary rock-climbing and mountaineering feats. 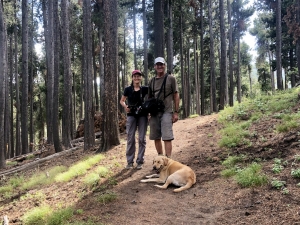 My sister Vicki, brother-in-law Pat and their faithful companion Rosie, doing what they do most weekends – heading ‘bush’ from their home base of Boise. We had great fun walking through the lodge-pole pine forests adjacent to their campsite in Sawtooth National Forest – southern Idaho, listening for Cassia Crossbills. 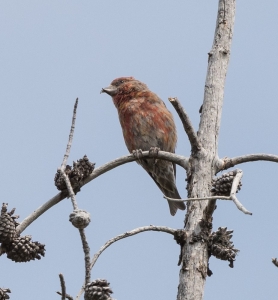 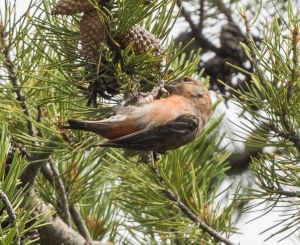 The challenge for birders wanting to add Cassia Crossbills to their life-lists or other lists, is the fact that the species is almost identical in appearance, song and calls, to the also-resident Red Crossbills. Most of the birds properly identified from the area of our search were Cassias – and we were confident that most, if not all of the birds we encountered were the targeted species. The Cassia Crossbill seems to have a ‘boofier’ head compared to Reds, and the calls are a bit lower – sounding to me more like a Chup, Chup, Chup, than the ‘Chip Chip Chip’ of the recordings were were able to source of the local race of Red Crossbills. Vicki managed to make sound recordings of some of our sighted birds, and we found that some of the birds we photographed were wearing interpretable leg bands (as per acrobatic individual pictured here, using the namesake bill anomaly for extraction of pine cone nuts). 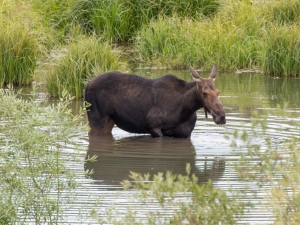 The last thing I expected to see near the Idaho-Nevada border – a Moose!

III.  After our Crossbill adventure in Idaho, Robyn and I drove three hours south to Elko Nevada in preparation for my hike into the Ruby Mountains for another of the iconic single-species birding missions (following most recent such efforts for Eurasian Tree Sparrow and Cassia Crossbill). Despite a big day clamouring around the Island Lake cirque, I couldn’t find any Himalayan Snowcocks, despite the frustration of faintly hearing calls – reminiscent of the infectious ‘whoob-woob-woob’ war-cry of Curly – my favourite of the Three Stooges. So back to Elko for the night – nearly hitting a Dusky Grouse on the drive out of the scenic, but recently scorched lower portion of the park, and preparation for round-two, next day. Although I made it to the namesake Island Lake before sunrise, and made my way to preferred scoping location a hundred metres or so above the lake, I ran out of patience after two hours of laboriously scouring the surrounding scree and cliff faces that form the cirque. As the day before, I heard very faint calls every so often. This time I decide to leave the scope behind and make my way up the hillside, in the direction that I perceived the calls to be coming from. The task became increasingly difficult as I made my way towards the central cliff area – and it seemed that the calls were in fact coming from the other side of the vertical barrier. Eventually, better sense, guided by increasing awareness that I’m no longer a teenager, dictated that it was time to make my way down to the scope –  then the hour and a half to the carpark, and re-group for a third effort, perhaps at the adjacent Lake Lamoille site – where my luck might prove better. I shot the video below (see if you can activate it), andno more than a minute later, saw a gorgeous Himalayan Snowcock hop onto one of the rocky formations at the top of the cirque. I could then see another one – no two, wait four! of these massive game-birds  working their way through the jumbled boulders, down from the crest in my direction. Gawd I love it when a plan comes together. 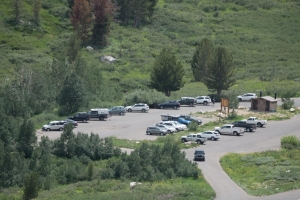 The carpark – where birders typically begin the strenuous hike to the most proven Himalayan Snowcock viewing sites in pre-dawn darkness. 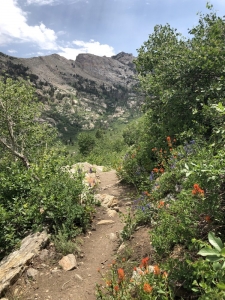 The upward trail, painted with wildflowers. Further down the valley towards Elko had been severely burnt since my trips to the area in 2016. 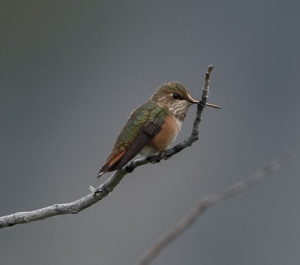 Rufous Hummingbird taking a break from the sea of wildflowers. 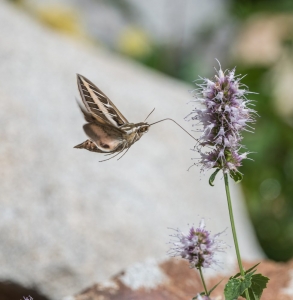 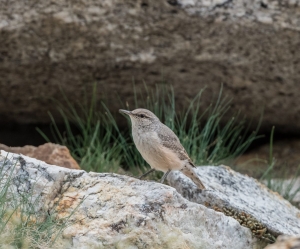 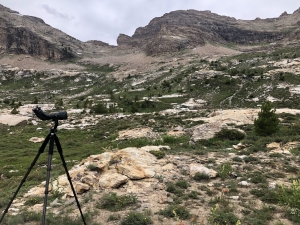 The usual spot, above Island Lake, for scanning the upper reaches of the cirque for Himalayan Snowcocks. When the feeding conditions are good at the upper areas of prostrate vegetation, the birds can be numerous. I had no such luck this time… 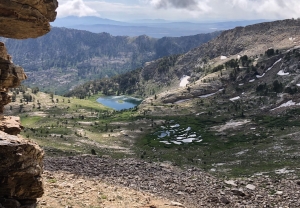 This is as far up the cirque as I wanted to climb – following the ghostly calls of at least one Himalayan Snowcock, though I believe it was on the other side of the upper ridge. 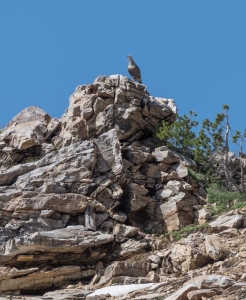 YESS!! Like a ghost – it was suddenly ‘there’. And calling much (much) louder. 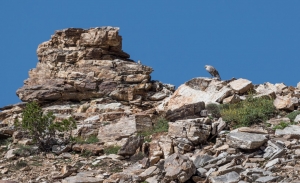 How many can you count in this image? Try again!

IV.   Grouses (Greese?), and the long-overdue search for a Sooty Grouse. 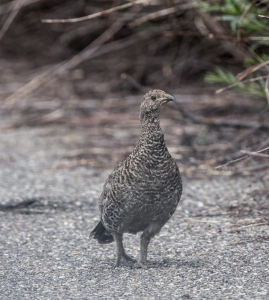 Nope. That’s a Dusky Grouse on the Ruby Mountains access road – too far East for Sooties, but otherwise just about impossible to separate. 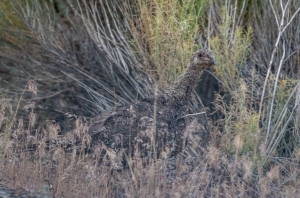 No way! Its a Greater Sage-grouse that Robyn spotted from the car in northern Nevada on the drive back to Boise. Look at the size of that schnoz! 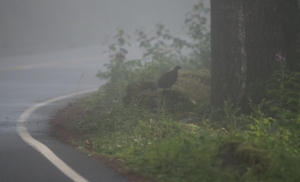 BINGO! A male Sooty Grouse on our second day of search at the base of Mt Rainier, Washington, barely discernible in the early morning fog during our drive up to the passes. 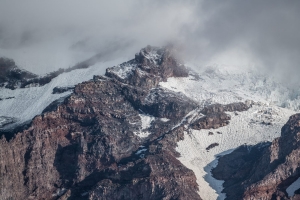 Spectacular scenery as the fog cleared. 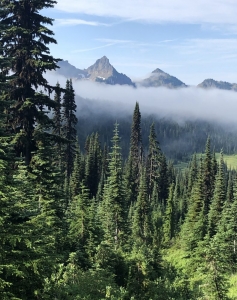 Paradise (the actual name of the place), where recent sightings of Sooty Grouse had been reported. 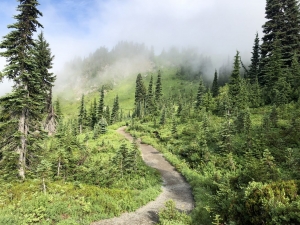 Magical kingdom of the Sooty Grouse. 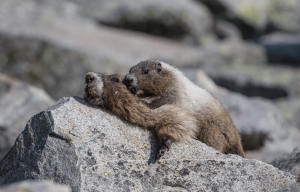 Hey, did you hear the one about the Marmot that shouts ‘ALAN!!’? Check it out on Youtube. 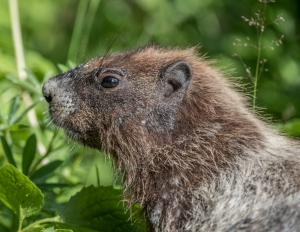 Young Marmot in the emerging beautiful day in Paradise (really, it is actually called that). 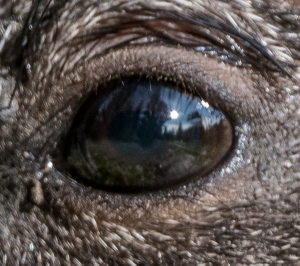 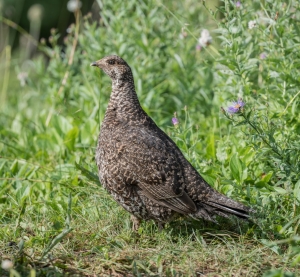 Sweet Potatoes indeed. A female Sooty, with her kids hidden in the low growth behind her – I could hear them. 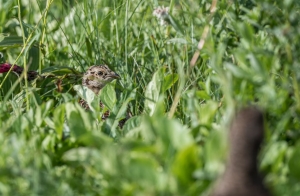 Mama tells baby to lower her head and be quiet. 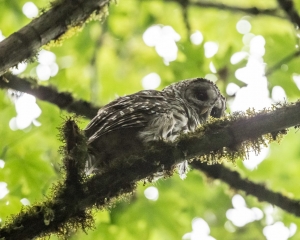 We finished our Washington experience searching local hangouts of Barred Owls. We got lucky with both of our targets! Better book flights. But first need to decide where to…

Back in the game.

Southwest for a few days
Scroll to top