My buddy Murray Scott and I arrived in LA from Sydney on separate flights, but met up in time for our  morning connection to Miami on Thursday morning (26 June). South Florida was intended to be the start of a counter-clockwise bird-chase around the lower-48 States with further stops in North Carolina, Maine, Michigan, Minnesota, Idaho, Washington, Southern California, Arizona, Texas, then back to Florida. Oh, and a dash to Colorado at some stage. We haven’t had the greatest start re pace, but still hope to squeeze those travels into two (ish) weeks.

‘Not the greatest start’ refers to our delays leaving Australia, by a day, then having our Norfolk Virginia (following yesterday’s Hatteras, North Carolina seabirding trip) to Portland Maine flight this morning cancelled. But at least the later setback has given me a chance to catch up on planning, blogging, laundry and sleeping, while Murray spends a gob-smacked day wandering around the massive church of all things outdoors – Bass Pro Shop in Norfolk.

The intention for our Florida stop was primarily to score the long-staying Miami Zenaida Dove, the similarly birder-friendly Yellow-green Vireo down on Key Largo, and to try for the still-present Antillean Nighthawks another hour or so SW at the Marathon Key Airport. Those who read an earlier blog recounting how I managed to miraculously miss the nighthawks during their peak courtship/calling period, hanging back for them from the afternoon I learned of the 2nd ever US record for Red-legged Thrush, a spectacular Caribbean species, but somehow made the worst, or perhaps laziest decision of the year – that the thrush will surely hang around for the army of birders likely to hit the Fort Lauderdale park the next morning. Smarter to continue my mid-afternoon snooze in my Marathon Key hotel, catch an earful of calling nighthawks in the early evening from the south end of the quiet airstrip, where the birds had been consistent over the previous few evenings, then drive up to Fort Lauderdale in time for the 7AM opening of the gates to the city park where the red-legged, cobalt-bodied beauty had graced the first wave of birders the afternoon before. I stuck around the airport for three hours without hearing a peep, got to bed in Ft Lauderdale way late in the night, arrived at the thrush-site in time to join the anxious throng of listers, and spent three hours trying to accept that the bird was gone.

With that sad story still burning in my head, imagine the impact of the news Murray and I received upon our evening arrival in Miami: a Red-legged Thrush had been photographed in a local Miami Park that very day – the third-ever report within the ABA area. This time there would be no stuff-ups – and there weren’t; we arrived at South Pointe Park first thing in the morning, and with a bit of help from Dotty Robbins and a couple of her birding pals, we were onto that gorgeous bird in minutes. The reason that the thrush was so easy to observe, is that it periodically appeared to collect small twigs – up to half a dozen at a time, from a relatively open bit of gardened area before flying up into a thick bit of growth, presumably to add the twigs to a nest structure. I don’t think that venture is going to end well, but the good news seems to be that the bird is going to ‘stick’ around for interstate birders a lot longer than the previous two birds – which were one-day wonders. For me, the thrush has more than just the obvious redemption value, after my earlier stuff up with the species; this was the milestone 800th species for my continental ABA life-list. I think I’m the only dual 800-er for ABA and Australia. Whoo-hoo!

Red-legged Thrush – the second reported individual (presumably) this year, yet only the third ever for the ABA area. This was my milestone 800th ABA continental species (life-list).

From there it was less than an hour’s drive to the semi-rural location where the frequently-sighted vagrant Zenaida Dove was hanging out. This bird was much more elusive. We counted over 150 Mourning Doves – which can only be distinguished from nearly identical Zenaida Doves with close inspection: in flight the later has not-so-obvious white trailing edges to the wings, and a shorter, rounder tail. At rest, the white wing-feather tips form a small spot near the end of each folded wing. After two hours of driving to various strategic spots from which to scope surrounding fields, we drove back to our starting point, where SW 120th St abruptly degrades from residential quality black-top to rutted dirt road. A car was parked just beyond the transition zone, on the bitumen side of the change. We slowed upon approaching, and I rolled my window down to talk to this fellow, who was obviously staking out the ephemeral puddles formed where dirt met bitumen. There, in the puddle, where I almost needed to swerve to miss it, was the Zenaida Dove in the company of a Mourning Dove. But not for long. The birder did well to contain his frustration, reporting in his eBird writeup of the incident that night: “Mega-rarity – continuing. Came in at 11:30 to drink with a Mourning Dove at water puddle just where pavement stops and road turns to dirt. Flushed by a second car before photos. Noted rounded tail with lots of white on outer edges. Darker brown than Mourning Dove.” At least he saw it for more than our two-second “oh shit” sighting.

We hung around for two more hours waiting for a return visit before the other fellow left, then soon lost patience and resumed looking more widely, but ultimately failing to re-sight the bird, and heading south for the Keys.

We ‘may have’ seen the Yellow-green Vireo that afternoon interacting with a Black-whiskered Vireo at the Dagny Johnson Key Largo Botanical State Park – but it wasn’t vocal, and didn’t sit still for us. After a couple of hours enduring increasing mosquito suction, we’d had enough of trying to nail the bird down, and headed off, probably a little bit late, for Marathon Key, and a crack at the Antillean Nighthawks that were only being reported intermittently of late.  I had the sinking feeling of inevitable failure when we could neither hear, nor entice to call via playback, the seasonally resident nighthawks. We moved to several of the known Springtime hotspots for courting birds – where I’d similarly shuffled about back in April, when I missed them. Then, about an hour into our effort, Murray spotted eyeshade of a distant flying bird. We played night-hawk-speak through Murray’s similarly super-duper iPhone speaker, and bingo – the bird called back. High fives, and back on the road for Miami. The plan was for a second shot at photographing the Zenaida Dove the next morning prior to the flight to Norfolk, Virginia mid-afternoon, and the three-hour drive down to Hatteras in front of the next morning’s pelagic birding trip. Due to the attraction of many out-of-state birders to the easily-encountered Red-legged Thrush on the other side of town, there were numerous birders at the bitumen-meets-dirt transition of SW 120th St. Although the roadside puddle had dried up, there were continuing wet spots further from the road, and numerous Mourning Doves came and left, but this time without their adopted Caribbean cousin.

We made our flight to Virginia, completed the drive to Hatteras, slept 5 hours, and managed to make it on time for the 5:15AM departure of the Stormy Petrel II, with a smaller than expected crowd. Maybe other knew what we didn’t: the gulf stream would be dead flat for the entire day, uncharacteristically without even a hint of wind. And of course flat seas mean flat sea birding results – the petrels in particular, making themselves scarce in such conditions. I’d hoped for something special, such as Fea’s Petrel, or Trindade Petrel, but of course lowered my expectations as the conditions of the day unfolded. Still, it was a lot of fun to see  some of the usual suspects, both on the boat (Brian, Kate, Ed) and off (Shearwaters and Storm-petrels, and admittedly, a couple of Black-capped Petrels). The real stars of the day were the super-rare Gervais’ Beaked Whales that hung around the boat for an extended period – for possibly the best ever views of the species in the west Atlantic, where they are exceptionally rare.

Murray seeks success in the face of failure. In actual fact it was a good day for the Aussie, adding 9 species to his American life list of 9. No, actually, he’s up to about a hundred. If only he can remember what that list is comprised of. 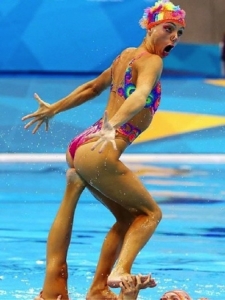 Kinda how Ed, and the rest of us were feeling in the calm, petrel-less Gulf Stream.

But then we had a break: a friendly pod of rarely seen Gervais’ Whales:

Deep-diving and super-rare Gervais’ Beaked Whales made the flatware trip much more than a disappointment. They hung out with us for a half hour or so, sometimes turning upside down – tempting us to jump into the 84F water and provide belly-rubs.

I… must… eat… less… on these non-windy days… A Cory’s Shearwater tries to get airborne.

Beautiful Black-capped Petrel, just sort of hanging around in the calm.

Great Shearwater living up to its name. This is one of the few ‘double-counted’ species on my dual-life-lists of 800+. I saw one on an eventful Tasmanian pelagic trip a couple of years ago.