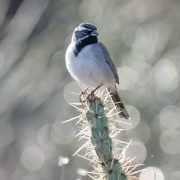 Oh well – I gave it my best shot. My ‘shot’ extended over a span of five big days of searching the vicinity of most of the reported sightings of Nutting’s Flycatchers throughout the stick jungles of the Bill Williams River National Wildlife Reserve over the past seven or eight years. I hate dipping, especially when the process absorbs a whole week, but it’s time to move on. I suspect that the twitchable bird that had been seen once or twice annually over the past few years at the ‘parking lot’ has moved on, or worst. Whomever manages to record or photograph one of these otherwise strictly Mexican flycatchers within the ABA area this year will have my sincere awe – good luck!

In the end, despite the disappointment of missing a bird I’d scored in ’16, and in one sense spinning my wheels for a week, I finished the week with two really enjoyable days of absorbing the quiet and scenic nature of the place. Once I settled down after the intial disappointment of seemingly missing both the flycatcher and the Blue-footed Booby at Alamo Lake, I gave myself a good talking to, and began to properly appreciate the nice range of birds through NWR, including a few surprises like a calling Virginia Rail, and several flushing Wilson’s Snipes. I was cheered by the comical scampering of an indignant mob of maybe 30 Gambel’s Quail, and impressed by the beautifully schitzzo song, and irreverent shape and posturing of territorial Crissal Thrashers. These experiences registered an early high marks for my final month of American birding adventures.

Following are a few images of the habitat and surrounds. This is one of the myriad faces of Arizona that inspire my love of the state/State. 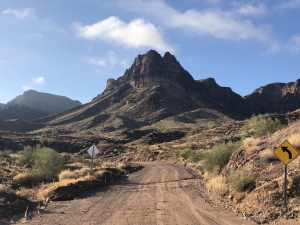 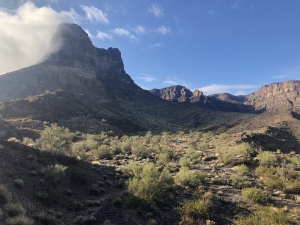 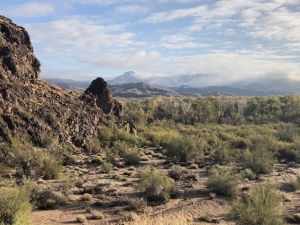 The wooded area above centre remarks the usually dry Bill Williams River, and the corridor of locales where Nutting’s Flycatchers have been occasionally sighted over much of the past decade. Problem is, most years only support one or two birds. Hence ‘resident species’ seems a stretch. 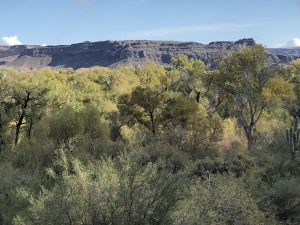 Accessing the corridor of trees is very difficult – and travel within the wooded areas is even harder due to extremely dense low-growing brush, mostly dead, overlaid and underlaid with fallen trees. Old trails marked with marker tapes tied to bushes are for the most part only marginally better than full-on bush-crashing, which is what I resorted to, along with creek walking in order to reach as much of the flycatcher habitat as possible during my six days of effort. Although not as arduous as some of the Hawaiian missions I undertook this year, it was frustrating and energy-sapping work, with ultimately no certain Nutting’s sounds, and no Myiarchus flycatcher sightings. Obviously it would have been wiser to visit during the Spring, but then if Spring had twenty extra days, I’d have gone to twenty extra places that priorities didn’t allow. 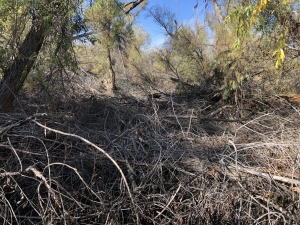 Typical ‘trail’ through the riverine habitat. 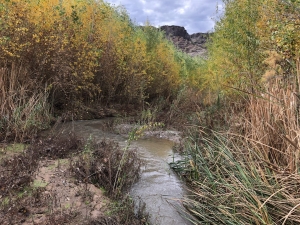 This stream, activated by recent rains, ran roughly parallel to the Bill Williams River – which was dry, and provided a god-sent avenue to the vicinity of areas I wanted to search. ‘God-sent’ doesn’t apply to the early period of creek walking, before I learned the hard way of the need to keep my camera in a waterproof bag within my day-pack. After a submersion of approximately 3 seconds, the lens, and camera fogged up, and were non-functional, until earlier-described heat/cold treatment breathed new life into the system, which is now working fine, except for slight grinding sound during auto-focus hunting. 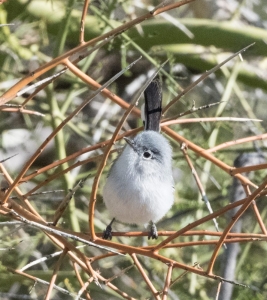 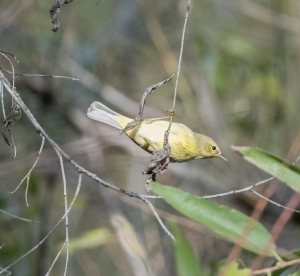 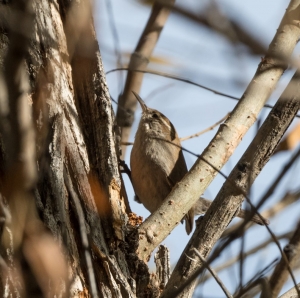 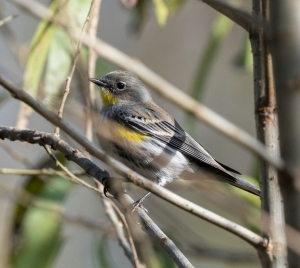 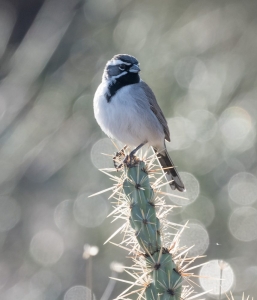 Black-throated Sparrow – one of my favourite birds of the SW.

I really goofed re Black-headed Gulls. I’d been waiting for the first winter reports via the rare bird alerts – somewhat surprised at the lack of reports, considering how often the species was reported in November and December 2016. Steve Petersen, an Ontario birder, alerted me a couple of days ago that a BHGU that has been hanging around with 400 Bonaparte’s Gulls, and at least one Little Gull at Niagara Falls, just over the Canada border for about a week. I wondered why this bird hadn’t penetrated the eBird or NARBA rare bird alert system, and found that there had in fact been been numerous reports this Code 3 species in the Northeastern US and adjacent Canada in recent times, including during the period that I was up there ten or so days ago. Buggah! So I’m currently headed back that way with high hopes. Will let you lot know how it goes, if it goes. PS, two more delays for my United flight (big surprise), we’re now told there are ‘technical issues to be addressed, because your safety is our biggest priority. I hate United. 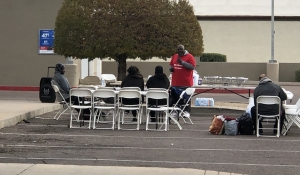 Got some old-time street religion while refuelling my filthy rental SUV in Phoenix prior to my flight to Buffalo this morning (Saturday). I liked what I briefly heard – about taking responsibility for yourself, and not being afraid to reach higher. I chimed in, if only to myself, in the circulating ‘Amens’.

Finally, a calendar check and adjustment to timeframe of last couple of days. There’s confusion beyond in my own head about this, so, with the benefit of my iPhone images to put places and dates together better, here’s where I’ve been and birds I’ve found and missed since returning from my latest Australian intermission. OH:  Also note that when my posts are uploaded, it is a day later in Australia. So if I post something on a Tuesday, it will have a date of Wednesday on it, when you read it.

Tuesday, 26 November – I continued YFGQ search in Oahu and successfully heard two birds near where Amanda and I had bumped into one another.

Saturday, 30 November, I followed Amanda’s example, and saw at least two Dovekies in the high winds, trying to avoid hitting land. These were unfortunately not photographable for me. I also found two small groups of Purple Sandpipers, which were photogenic.

Sunday, 1 December I dipped again on the Blue-footed Booby at Alamo Lake, Arizona, despite investing in the cost and effort of paddling around in a kayak.

Monday 2 December – through to Friday the 6th (yesterday), I worked hard to dip on Nutting’s Flycatcher. That’s five days of search, not the six I earlier estimated; it seemed more like eight. I’m now on a layover at O’hara, Chicago, hoping for a Black-headed Gull at Niagra Falls Ontario tomorrow. But its a United flight. So yeah, of course, its now been delayed. The typical scenario is that once you get the first delay – this one just a half hour, and a gate change, it is as often as not, the beginning of a long process. I love American  Airlines, but too often their flights don’t work in my tight schedule, and I have to go with the underlings. Fingers crossed, it would be nice to get a good sleep tonight before trying for a potential new Big Year record.

*I sought advice widely about the appropriateness of going from Big Island to Oahu, with my only activity on Big Island being the pelagic trip, and I’m comfortable about my progressions in relation to ROD tree disease on Big Island.