I’m ready to admit that I suck. I can’t understand otherwise why I cannot do what other birders have done over the past week, and pick out a single Black-headed Gull from 500 Bonapartes Gulls, all within scope view of ‘the whirlpool’, not far below Niagara Falls. Yesterday’s excuse was that I didn’t have a scope – mine is in luggage storage at Anchorage airport – in my ‘Alaska Kit’ bag, clocking up $6 a day – probably for another two weeks, which will put the bill beyond the $250 mark. Planning is another area that I’m beginning to suspect I suck at. But I couldn’t use the scope excuse today, because Toronto birder Steve Petersen, who first flagged the BHGU to me when I was similarly struggling in Dipsville, Arizona a few days ago, generously took mercy on my tired arse and cancelled several meetings from work to join me in the drizzling rain, scope and all, for today’s effort. We picked out a Little Gull – with all-dark underwings, but couldn’t discern the Black-headed Gull, which was definitely mixing it up with the Bonaparte’s Gulls yesterday right in front of my distant binocular view from the US side of the whirlpool. I know this because 8 birders reported it from the Canadian side of the border river – dissecting it from the same swirl of 500+ feeding gulls that I was focussed on for hours. In fairness however, since the only diagnostic feature of this particular bird at this particular time has (from a distant view), is a dark flash under primaries – and when looking down from the Gondola bases – whichever side of the river you want to park yourself, flash views of underwing markings are few and far between. Thats why today, as yesterday, I spent considerable time down at water level at adjacent shore, not so far northwest of the principal gull feeding action. From there, replicating yesterday’s trials, Steve and I spent several hours today inspecting lots of underwing action, but saw nothing approximating the black underwing tips of our elusive Black-headed Gull. It was very kind of Steve to help today, but by 3pm I’d had enough, and wasn’t feeling great (I hope it isn’t a cold, flu, or mesothelioma – since I have the finish line almost in sight), and I pulled the pin.

After my wimp-out, my recuperation plan included attempting to revive my camera again – it drowned in the rain, and washing my rain-soaked clothing and enjoying a half-hour hot shower, but as is rarely a problem, my hotel doesn’t have guest laundry machines. They have a take-away laundry service with costing based on a per-item rate, which I guesstimated added up to about $50 a load. I’ve turned my room into a drying chamber instead. Unfortunately, my camera, which I love far more than my treatment of it suggests, has not responded to heat treatment, but I haven’t given up yet.  Four minutes til brain damage, right?. I want to go home.

I’m going to give the gull game one more day tomorrow, then move to an hotel with coin-op laundry machines, though I have no idea what part of America that will be (the hot shower was good, as is the Fireball treatment).

I guess that today’s challenges would have been less onerous, but for the fact that upon crossing the border back to the US side of the falls, I endured the familiar third degree response from US Immigration. This process varies from agent to agent (yesterday’s crossing was OK), but this guy looked cranky even before he scanned my passport, and it all went downhill from there. The first thing these guys see on the computer screen is that I renounced US citizenship 35 years ago in order to take up Australian citizenship. They really don’t like that for some reason. And of course, once the passport is inspected, there are ten or more entries to the US this year alone – about half when I was required back home for short visits, and the rest when crossing in and out of Canada for birding purposes. He put on a performance, and reminded me about the nature of the privilege I’d been granted with my B2 visa, but kept it reasonably brief, and significantly, I wasn’t directed to an interview room – something that happens about a quarter of the time, and can be upsetting. With any luck I won’t have to go to Canada again this year, and the bushfires, which have gradually moved towards the Reptile Park these past four weeks or so (now 5km away, but being held in check, as of today) won’t drag me back for what may be a premature end of my American birding year – so. maybe no more inward border crossings til my next US family reunion – in 2020. 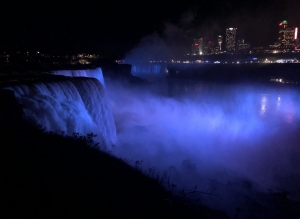 Niagara Falls at night from US side of the great divide

Zoomed view of resting mob of Bonaparte’s Gulls. Anyone see a red bill amongst them? 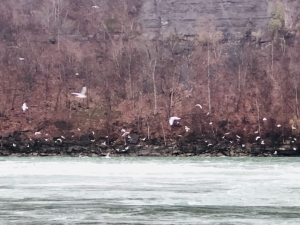 The view from down below gave much better chance of detecting diagnostic dark tip of underwing. 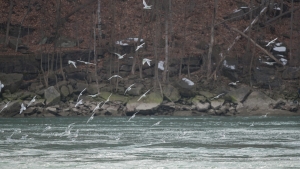 Kind of like Newman’s mail dilemma, the gulls at the whirlpool never stop.

Canadian birding mate Steve Stevenson probably didn’t know what he was getting into when offering to join me in the rain today. He was a real champion, and gave it a huge effort.

PS: today, Tuesday – a day after above photo of Steve looking for BHGU, I’m flat on my back with the first flu I’ve had in many years. Can’t get out today for another shot at the gull – and perhaps an ABA Big Year Record, so maybe tomorrow. Yuck.

Insult to injury, my precious camera is less forgiving after the latest abuse. the info screen at top, near shutter release button is blank, and the internal viewfinder data is no longer present – just the image of subject matter ahead. However, I can make the rig work by pressing the info button at back of camera to see settings portrayed on back led panel, and everything else seems to work OK.

Hopefully, both my camera and I can together manage to limp to the end of the calendar year, and get the job done – seemingly in increasingly slow motion. I see that Steller’s Eiders are starting to show up at Kodiak, as hoped for, and I can’t think of a better place to spend Christmas with Robyn than Alaska – perhaps on Adak Island, where the potential for magic is always present. So one more crack at the Niagara Falls spoiler, then Florida where Short-tailed Hawks continue to feature on trip listings, all the while hoping that Sth Texas and Arizona will wake up, for gawd’s sake, and do something.