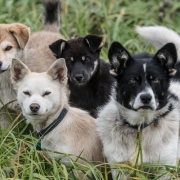 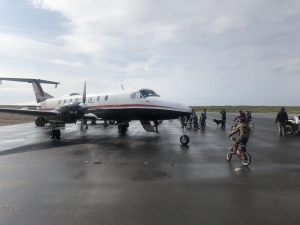 Life-blood of the islands. I always seem to make friends with all the local kids – and their dogs. The kids on bikes here were convinced I was a cowboy, and a movie star. I levelled with them just before I left.

This is a very brief look back at last week’s Gambell blur. I want to get to sleep at a descent hour tonight, as tomorrow begins the five-day Searcher pelagic birding trip out of San Diego. I’m in Irvine tonight after chasing the much-appreciated Common Ringed Plover that showed up yesterday, an hour or so north of San Diego. More about the Plover at bottom of this short blog. After Uber-ing my way to Irvine from LAX last night, and to the Plover-gig this morning (my Australian drivers licence expired last week and I’m sweating on arrival of new one, as the rental car guys won’t cooperate in the mean time), I spent most of the day continuing in efforts to organise a four-day Hawaiian pelagic trip in mid October. This trip could yield totally insane results, but I seem to be stuck with only five brave participants – me included, and need for one more to share the big cost of getting a vessel out into those good waters.

I think of Gambell with a certain amount of fear and loathing, not having had the best of times there in 2016, spending six weeks adding only a very few species due to poorly oriented winds that refused to blow vagrants in from the Asian migratory flyway to the east. There were other distressing circumstances that fall that wouldn’t be an issue this time – but still…

I’d initially organised a Gambell Old Town ‘house’, but on presentation, and after a group of kids just walked in through the unlatchable door, I moved into the Lodge. Not cheap, but with doors, toilets, showers, and heating, there really wasn’t any choice. 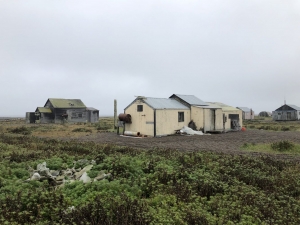 My digs for the week looked pretty OK from the outside. But the bungie-cord door latch should have been a giveaway. 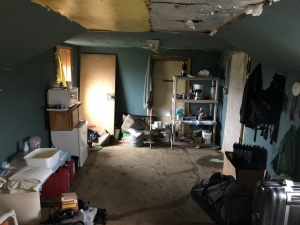 This is the inside of my surprisingly expensive home. That’s the real front door leaning against a wall. And yep, that’s the toilet in the middle. No water, shower, or functional heating. So I piked out and moved to the traditional birders’ accommodation ‘the Lodge’, which I hadn’t expected would have a room available during peak birding season. But it turns out I’m early for the season’s commencement – and had the island to myself for my first three days – and practically the entire lodge during my whole stay. Things do seem to work out. 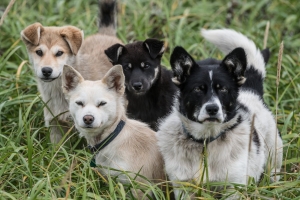 One of the best things about Gambell, besides the birds of course, is the Yupik people – who I admire in many ways. But the next best thing is  the dogs. The village has a long history of dog ownership, which until not so many decades ago related mainly to pulling sleds. Current breeds are starting to stray out of any such potential for work, but they are still much loved. I always end up making friends with many of them. This foursome were initially very aloof, but by the end of my stay, each sweep I made of the Old Town boneyard brought them bounding with wagging tails. 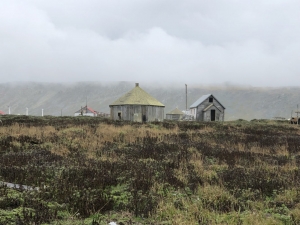 A view from Old Town boneyard. 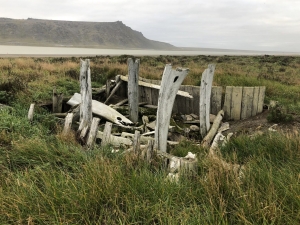 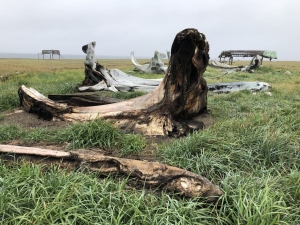 The village has a long history of harvesting Bowhead Whales, Seals, and Walruses. There are annual limits to these sustainable harvests, which are a crucial part of the Gambell culture. 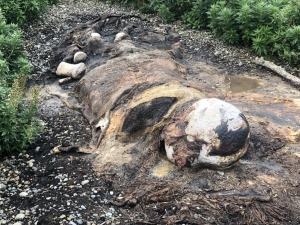 Spawn of Devil Child. Or maybe a whale fin. 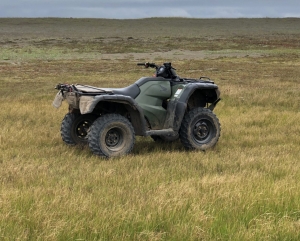 My transport for the week.

I hope to add more to this blog when I get a chance. Maybe while I’m out at sea during the coming week. But one thing that deserves to be mentioned now is the help I received from my California birding bud Michael Woodruff. My only communications from Gambell were via a dinky $90 phone with the GCI network that is used in remote Alaska (only?). For help with ID on so many occasions, I used the phone to take very poor photographs of very poor images on the back of my camera. Sometimes the replies were way embarrassing, but Michael never complained. Of course the Jokim’s Razor theorem, or however it its spelt, kicked my arse all over the island, as my Pechora Pipits became Red-throated Pipits, and very strange waders became Dunlins. I won’t embarass myself any further than that, but gawd I had an awesome list of rarities from time to time during the week. 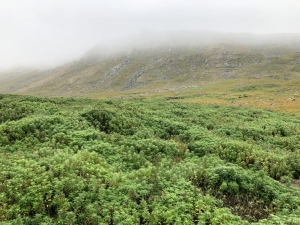 The Far Boneyard – perhaps the site of more first-for-ABA bird species than any where else? So much history, and I had it to myself for three days. The best bird I found was an Olive-backed Pipit, a lifer for me. 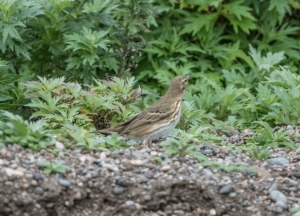 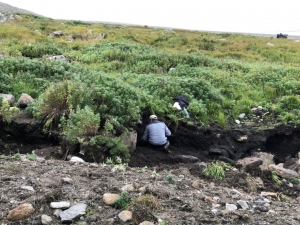 Digging up ancient walrus tusks and artefacts is a tough way to make a living, but the thought of hitting pay dirt is probably not that different to the mindset of the out-of-towners crisscrossing the same locations hoping for paydirt of the feathered kind. 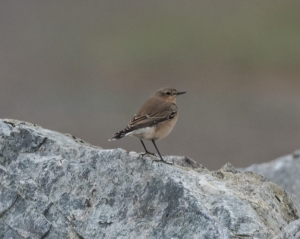 Northern Wheatear, which I had missed previously in Nome. This species, along with Lapland Longspurs and Snow Buntings were in big numbers during my stay, with fewer numbers of Common Redpolls and Bluethroats as well. 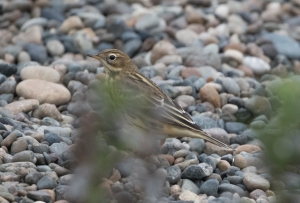 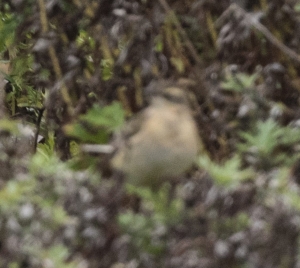 Mystery bird that I chased around the Old Town boneyard on my first day at Gambell. My initial thoughts was I had nailed a Siberian Accentor. I just couldn’t nail it down photographically, and the more I looked at this image – the only almost useful one I scored – the more skeptical I became of the bird’s ID as a mega. 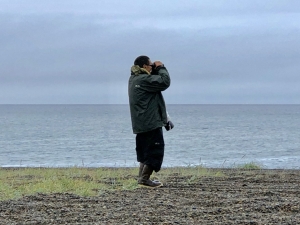 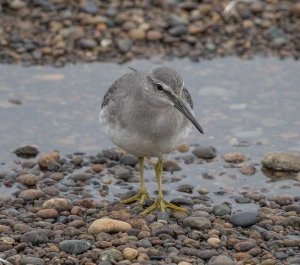 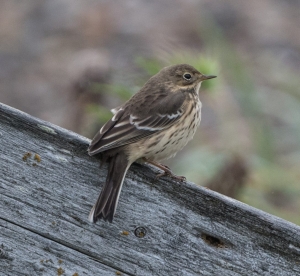 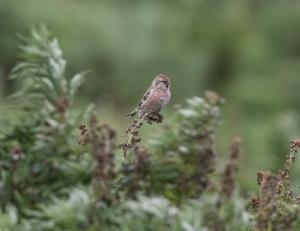 Common Redpoll. Or is it a Hoary? 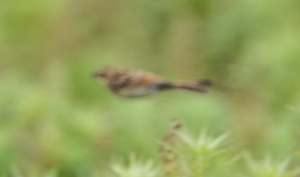 When Aaron Lang and his offsider Zac arrived on the island a few days after I did, they wasted no time in finding this mega-rarity – Pallas’s Bunting. Clarence and I benefitted from their advice on reminding it at Circular boneyard, but we were way too slow to replicate Aaron’s superb photographs of the bird. 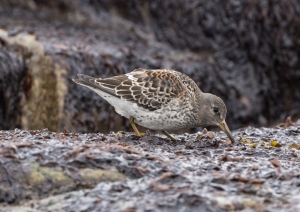 Clarence took me to one of the otherwise off-limits stony beach points, where amongst many fantastic birds, we counted 80+ Rock Sandpipers. What an amazing day it was! 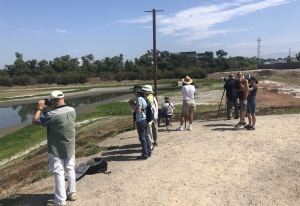 Back in California, with the tremendous luck of arriving the same day a Common Ringed Plover was discovered in Irvine, between LA and San Diego. Coincidentally, this is a species I’d really hoped to see on Gambell. 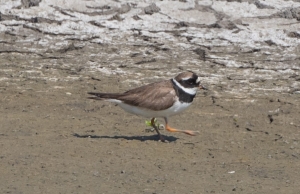 Family time, then quick swoop in Anchorage before Gambell