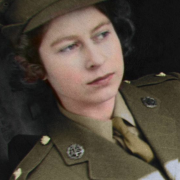 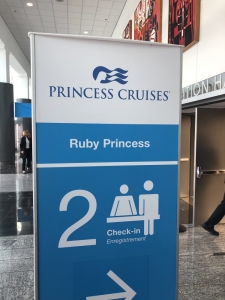 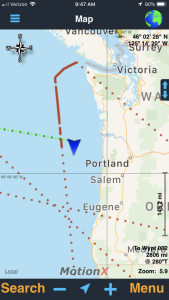 Approximate ship location when an impossible Nazca Booby circled us twice, before disappearing.

Due mainly to the severe restrictions of time – which tracks back to my four return trips to Australia early in the year to undertake important family business, along with a much more aggressive approach to Hawaiian birding this time ‘round, I have attempted to salvage my Pacific coast pelagic listing by forgoing any and all one-day Fall pelagic trips from Monterey and surrounds (I did a whole bunch of these in 2016 – they take lots of time and travel to accommodate) in favour limiting my west coast seabirding to four strategically timed and placed missions. These have included an ‘Island Packers’ one-dayer out of Ventura in mid-July, participation in the ‘Searcher’ five-day San Diego adventure that took place early this month (2 – 6 September), and two ‘repositioning cruises’ along the Pacific coast, when several of the popular summer Alaska coastal tour operators ‘relocate’ their vessels from the southern hemisphere to Vancouver and Alaska. These ships travel about 60 miles from shore in ideal seabirding waters at a speed of about 20 knots. They can be very productive for birders, with many hundreds of seabirds sometimes viewed from upper decks on a daily basis through scopes, binoculars, and super-telephoto lenses. Indeed, my Springtime repo cruise yielded all of my target birds. However, I can’t say that about my designated Fall repo adventure of last week, which was intended to clean up just one species – Flesh-footed Shearwater. This leaves me two ‘regular’ west-coast year-birds short: the big bad shearwater from northerly waters, and Least Storm-petrel from southern waters, especially off San Diego. For the former, I can’t make any of the dates currently on offer from the northern California operators (Debi and Alvaro), so I’m probably going to book a berth on another of the two upcoming repo trips from Vancouver to LA during the next month or so. So far as the later is concerned, 2019 is shaping up as one of those years, according to San Diego seabirder Dave Povey, as one in which the annual arrival of Leasties from the warmer waters of Mexico is either very delayed, or may not happen at all. To date, there has only been one report so far this year, and that was for a single bird. I’m resigned to the possibility that this is a species that I may well miss out on during this, my second ABA Big Year. 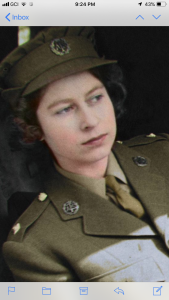 God Save the Queen.

I love the Queen. Being in Canada for the start of the cruise reminded me of that, owing to our respectful Commonwealth kinship. As Danny Devito’s character chimed up to his Arab comrades in arms in ‘Romancing the Stone’: “Hey! I’m one of us!”  Of course Robyn has been one of ‘us’ a lot longer than I have – my clock only started ticking when I pledged allegiance to HRH as a 24 year old American with eyes only for reptiles. Who’d have predicted that thirty years later I’d be awarded a highly prestigious award (AM – Member Order of Australia) for services to Queen and country? Robyn, as a school kid and farmer’s daughter in back-of-beyond rural Peats Ridge, New South Wales got to see a very young Queen Elizabeth waving from the back of a slow-moving train in that odd wrist rotating way she always has – directing approval towards her loving subjects. Robyn got dressed up for the occasion in her Sunday best – complete with white gloves, as was the way.

Anyway, following is a brief account of my recent Vancouver to LA effort.  It was a fun trip, mainly because Robyn joined me for it, and Laura Keene and her husband Dave were also on board, and we got to spend lots of time together, and drink too much wine at fabulous dinners on board the majestic if not slightly kitch ‘Ruby Princess’. The bird of the trip was yet another Code 4 Nazca Booby – this time WAY north of its tropical home-waters to the south of the ABA area. The four of us were having lunch on the first full day at sea, somewhere off the northern Oregon coastline, when this crazy lost booby approached and circled the ship. Laura, always prepared, had brought her camera along, and snapped definitive images of the bird through the 15th level dining area through a window, without even rising from her seat at the table. Paul Lehman later determined the identification of the young bird. Later that same day, way out at sea, another surprise visitor was an Osprey, which circled the boat for at least a half hour. 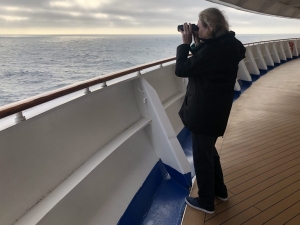 My personal Queen for the better part of four decades. Wonderful to have Robyn along for another leg of my year away, though this would be a short visit. 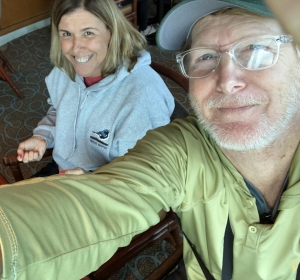 Caught that rascally Big Year birding type, Laura Keen on board the Ruby Princess! Laura and super-husband Dave made the trip that much brighter for Robyn and I, sharing wonderful meals together, and haunting the 8th deck bow with optimistic eyes cast afar. Laura has been a tremendous source of wisdom and encouragement for me during this year’s ABA birding effort, as she was throughout the last one. Her photo big year records will almost certainly stand the test of time. I still can’t figure out how she does it – always nailing shots of impossibly elusive subjects. 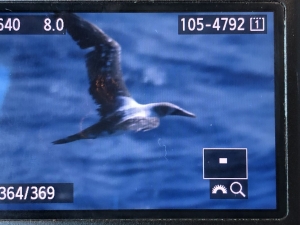 This is precisely what I’m talking about. The four of us are at lunch on the 15th level of the good ship Ruby Princess when Laura spotted an incoming bird that initially looked like a Gull, until it morphed into a booby. She had thought to bring her camera to lunch, whipped it out and began generating in-focus images of what proved to be one of the northern-most ever sightings of Code 4 Nazca Booby. My images would have been super sharp studies of the ocean surface behind a blurry UFO. 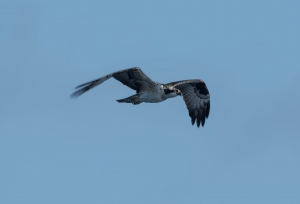 An Osprey provided a second unlikely visitor to the ship – 60 miles off the Oregon coast.

Although we had lots of views of Jaegers/Skuas (including four South Polar Skuas, several Pomerine Jaegers, and many Long-tailed Jaegers – bullies all), Sabine Gulls, Arctic Terns, Sooty/Short-tailed Shearwaters, a dozen or so Buller’s Shearwaters, multiple Black-footed Albatrosses, a sprinkling of Northern Fulmars, and two or three Cook’s Petrels, disappointingly, we saw no Flesh-footed Shearwaters (my main target) nor Mottled Petrels (Laura’s main target), and surprisingly few Pink-footed Shearwaters. ‘Fleshies’ are most often encountered when mixing in with feeding or roosting groups of Pink-footed Shearwaters. They have been reported from most pelagic birding trips from Monterey area northwards this year, so I’d been very confident of success during the cruise. Laura and I formulated a theory that the lack of certain species we encountered, particularly Pink-footed Shearwaters, storm-petrels and alcids, might have been at least partially due to weather circumstances. We experienced consistent tailwinds from start to finish, always equal to or exceeding the speed of the ship, which cruised through relatively calm seas with excellent visibility. Perhaps this meant that all but the ship-friendliest species found it too easy to give the massive Ruby Princess a wide berth as she steamed by in all of her enormity. 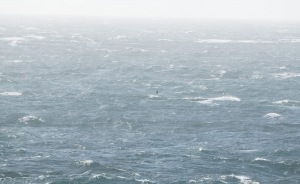 With a following wind and sea, the closest the birds were getting to the ship was ‘way far’. This Sooty Shearwater came closer than most of the birds we saw during the three-day cruise from Vancouver to Los Angeles.

Venturing much closer than the norm, this little group of Buller’s and Sooty Shearwaters were perhaps pumped with group courage, and allowed discernible photographs. 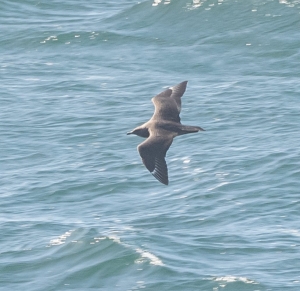 It seems as though I’ve been running behind schedule all year for the so-called common bird species of the ABA continental area, partially due to the shortage of time, but also due to the hardball nature of the games some of these buggers have been playing. Boreal Owl is a species I was beginning to think wouldn’t grace my year-list in 2019. I’d missed it on at least five long nights of search in Colorado, Alaska, and Washington. Owl Guru, birding ace, and all-round nice guy Khanh Tran, who is based in the Portland area helped me early in the year with a range of owls and other NW specialty birds, and has encouraged me in recent months to join him for a stab at Boreals in Washington – but I just haven’t been able to find the right time that works for both of us (he works full time – and I’m kinda tied up most of the time). My most recent effort came with not only Khanh’s continued encouragement, and with direct help from one of my other American guardian angels, birding wunderkind and now practicing physician in a medical residency program in Spokane, Michael Woodruff. Michael, like Neil Hayward, Laura Keene, and others, has provided pivotal help throughout so many of my biggest challenges this year, including the diagnosis of mystery bird photographs I captured, usually with misplaced optimism, from remote islands. I often feel guilty about the amount of time he, and others have taken from the demands of their careers to do so. I’ve managed to catch up with Michael a number of times this year already, when we targeted birds in his native Washington, including that unlikely Tundra Bean-goose early in the year, and tough-to-find Dusky Grouse later on. It was in that spirit that Michael offered to retrace with me his successful search pattern for Boreal Owls of a few days before, when he Matt Grube – another of the notorious ‘California four’ I associated with and benefitted immensely from, in 2016 (the other two characters being Johnny Bovee, and Michael’s dad Roger Woodruff).

Michael and Matt had heard at least four Boreal Owls over two nights of camping which they reported on eBird, managing sight one of these. So Robyn and I, in the absence of any relevant rare birds to chase on the mainland after our repo cruise, took Michael up on his offer to join us on an all-out effort to relocate one of the birds he’d heard/seen. Michael’s beautiful marathon-running, anaesthetist-in-training wife Mindy joined Michael and I for the fun drive up into the northern Washington mountains once he’d finished seeing his last patients for the day. I think he’s insane – as he would be doing his rounds again early the next morning. 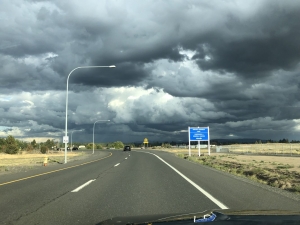 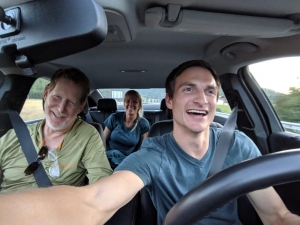 En route to the northern border of Washington with Canada, in the delightful company of Dr Michael Woodruff and one in a million wife Mindy. Why the Woodruff family is so helpful and friendly to an interloping birding hack remains a mystery. After seeing his last patients of the day, Michael was more than enthusiastic about heading out for a late night of bowling, despite an early morning start the next day. A poster boy for his profession, and for birding. Oh, and beyond his freakish abilities in both arenas, he’s also clearly the master of the selfie.

Fall Alaska 4: Back to St Paul
Scroll to top